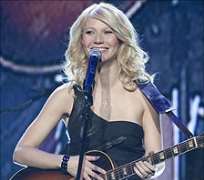 A total of 41 songs are in contention for the best original song category at the 2011 Oscars, it has been announced.

Three of them come from Burlesque, starring Cher and Christina Aguilera, which had its UK premiere this week.

The eligible songs will be whittled down to a list of no more than five by the time the Academy Award nominations are announced on 25 January.

The 2011 Oscars will be held on 27 February at the Kodak Theatre in Los Angeles.

Paltrow – who previously had a singing role in 2000 film Duets – features on two eligible tracks taken from her country music drama, Country Strong.

One of them, Me and Tennessee, which Paltrow sings with country star Tim McGraw – was written by her husband, Coldplay star Chris Martin.

Under Academy rules, a maximum of two songs may be nominated from any one film.