Scandal in Nollywood:Philip disvirgined me, Ini Edo snatched him from me –Ruth Okoro 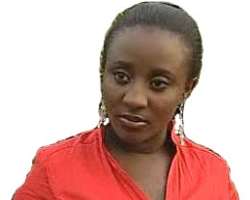 Though the gladiators are artistes, what is currently playing out in Nollywood is by no means a movie. So, it is no make-believe. It is a scandal of worrisome dimension and it is real life.
The dramatise personae include Ini Edo, Ruth Okoro, Emeka Ike, Jim Iyke and a US-based Philip Ehiagwina.

Scene 1:
Ruth is based in the United States of America and was once married to Philip Ehiagwina.
She alleges that Philip married her in order to secure America Green Card. According to her, Philip abandoned her even when she was just recovering from cancer of the blood and started dating other girls in Houston, Texas, where he now stays.

Scene 2:
Like a chicken that just arrived a new environment, Philip reportedly stood on one leg until he got what he wanted – Residency (Green Card) before he started playing big boy. Now able to shuttle to Nigeria, Philip allegedly dumped her for Ini Edo.
At a point, he was said to confessed to family members that he had to sleep with Ini to prove a point.
An infuriated wife, Ruth reportedly wrote Ini, pleading with her to “leave my husband for me”. Not only that, she reportedly warned Ini that Philip isn't the kind of guy any girl could put her trust on. Ini allegedly forwarded Ruth's letter to Philip, who accused Ruth of being unnecessarily bitter. That was the beginning of war among the trio.

Scene 3
Now the die seem cast, as the Ini Edo/Philip relationship has gone beyond bedmatics. Already, Ini, according to industry sources, might have accepted the proposal to marry Philip.

Scene 4:
Enter Jim Iyke and Emeka Ike
Nick-named Nollywood's bad boy, Jim Iyke' s alleged role in the current love war seems to portray him thus.
According to Ruth, she had always known Emeka long before her marriage to Philip. “He and Philip were friends,” she says. The duo of Emeka Ike and Jim Iyke were on the same location to shoot a movie, “The Preacher man”, in America. Ruth was later brought in by the producer and Jim Iyke who had been asking to date her despite the fact that Philip was his friend, put more pressure on her. It was there that she ran to Emeka for shelter.
According to Ruth, “I have always seen Emeka Ike as a big brother. Even till tomorrow I call him 'Big bros.'

Blackmail
But Jim Iyke, obviously cashing in on her predicament, allegely made the moves to date her. Ruth claims that he once called her to report her husband to her, that he was sleeping with girls and frolicking with them at a club they were together. From one issue to another, both Ruth and Jim Iyke fell out, but the movie mended the gap. As a regular boy, Jim was said to have rekindled his request and kept asking until Ruth had to shout him down. He shifted his attention to Ruth's friend, Jamaican lady. And pronto, he swept her off her feet.

Mix up
At some point hence, it appeared that everyone had in fact abandoned Ruth. It was then that Emeka who was shooting another movie resumed location. It was a relieved and an excited Ruth that welcomed him. She reported what happened to him and expectedly, he offered to play the role of big brother. That decision was later to become Emeka's albatross. And to make matters worse, Ruth played the role of his mistress in the movie.
Out of jealousy, according to Ruth, Jim Iyke called Philip and lied to him that she had been sleeping with Emeka.

Ruth is unfaithful –Philip
Philip who had not seen his wife for more than two years hopped on a plane and headed straight to Maryland, the movie location. He was said to have gone to Ruth's room and knocked three time but got no response.
In an earlier interview with a news magazine, Philip had alleged that Emeka Ike was actually in bed with Ruth, the reason they did not open the door.
But Ruth says she had never slept with Emeka.
She specifically denied, saying: “Emeka was not with me on that day. What happened that day was, we had gotten back to the hotel around past eleven. When they brought food, Emeka called me to come and take because they took the food to his room. When I got back to my room, I went to the bathroom. I was already in the shower when my room phone rang. I couldn't take it and said whoever was calling me would call back. When I got out, my cell phone rang, and it was Philip my husband. He hadn't called me for God knows how long.

Rebuff
He asked how I was, and I replied why he cares since he had not called me for years. He said Jim Iyke told him I was shooting a movie in Maryland and since I had told him earlier that Jim was asking me out, he said he would ask Emeka to keep an eye on me. I said you've been out of my life for so long and I've been fine, anyway thank you. Shortly after that he said he wanted to say goodnight that he was about to sleep and was in the kitchen.

Philip's stunt
Before I knew it, I heard a hard knock on my door but I did not answer because nobody has ever knocked my door like that. I called the reception and nobody picked up the phone. I also called Emeka's room but he didn't pick up. Later, a call came into my room and the receptionist said policemen wanted to talk to me. The policeman said a guy was disturbing them at the lobby, and asked that I come down. I informed him that somebody just knocked at my door three times so I can't come out on my own but I would if they come to walk me out. Police came and peeped into my room and walked me out. Behold, the person I saw was my husband who just told me he was fixing his food. The police asked if I knew him, I said yes and no. Yes, because I got married to him five years ago and no, because exactly a week he got his Green Card, this would be the first time I'm seeing him. The police asked him the last time he saw me and he said it's been a few years. The police asked him what he was doing there, he said one of his friends by name Jim Iyke called him that his other friend was taking advantage of his wife. The policemen said they don't have the right to judge but if he abandoned his wife for so long and anything like that happens he has no right to blame anyone. He was told to leave the hotel immediately, he left in shame.

Emeka not my lover
Emeka had no idea what was going on, it was in the morning that he was told. I've never dated Emeka before. I have never slept with him. We've known each other for a long time.

Virginity palaver
For now, there is no doubt that divorce is on the card for the onec love birds.
But Ruth, in her letter, is cursing the hell that her virginity, spirit of her unborn baby (she said she suffered a miscarriage due to shock of discovering that her then husband impreginated a girl in Houston, Texas), her money and fame you are trying to work for now will unite and fight you. Philip, according to Ruth, was responsible for her miscarriage because of the trauma associated with the discovery of his philadering.
Ruth is a runway model who has done a couple of works with Beyonce. She is now venturing into acting. She met Philip when her parents sent her to Nigeria to acquire some 'Nigeria ness'.

Emeka angry
Today, Emeka Ike is angry, as he alleges that Philip goes about scandalising his name; that he now reports regularly at Zone 2 Police station.
But I don't even know where Zone 2 is. I was not invited by the police neither have I been there in relation to Philip's case.

Ini, Jim can't be reached
When we called Ini Edo's number, the person that picked the phone said she had stopped using the number for over a year despite the fact that we spoke with her on that same number less than three months ago. Besides, the voice at the other end sounded unmistakably Ini's. Jim Iyke who keeps changing his number was unreachable.