Are art museums guilty of stealing? 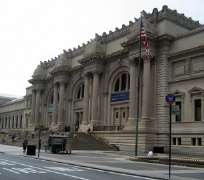 Should museums return national treasures to their places of origin?

The Metropolitan Museum of Art in New York announced this week that it is sending 19 items, including a bracelet and a small bronze statue of a dog, excavated from the tomb of of the boy king Tutankhamun, back to Egypt. Art repatriation, it seems, is beginning to pick up steam.

This is not the first time that the Met have returned artifacts to their places of origin. As the Metropolis blog at the Wall Street Journal pointed out, last year the museum returned a granite fragment inscribed with the name of an Egyptian ruler to Cairo, and in 2001, the Met sent back a 19th-Dynasty relief, showing the head of an Egyptian goddess. Other items, such as Euphronios Krater (an ancient Greek vase), the Hellenistic silver collection (an ancient set of 16 silver pieces smuggled out of Sicily), as well as works of art that were looted by the Nazis, have been sent back home.

The recent decision by the Met was prompted by Egypt's antiquities chief, Zahi Hawass, who is on an international “crusade”, according to Ashraf Kahlil, who profiled Hawass for the Journal. Hawass claims that archeologically important and rare artefacts belonging to Egypt are scattered around the globe in various museums and he wants to claim them back to be displayed in a new national museum due to open in Cairo in 2012.

Most notably, Hawass has been after the Rosetta Stone, displayed for more than 200 years in the British Museum since the British defeated Egypt's French occupiers in 1801, he also wants the Zodiac of Dendera, housed in the Louvre in Pari,s and a 3,400-year-old bust of Queen Nefertiti on display in Berlin. The BBC pointed out that other countries want their treasures back too; Greece lays claim to the Parthenon (or Elgin) Marbles that are also held in the British Museum, while Peru is taking legal action to try to reclaim Inca treasures from Yale University in the United States.

Kahlil reported in the Journal that the “antiquity-repatriation effort” is gaining steam. In April, Hawass hosted a conference bringing together art representatives from countries such as Libya, Greece and Nigeria, and encouraged them to submit wish lists of the national treasures they want returned.

However, there is very little legal precedent for forcing museums to give-up treasures that they have held and looked after for decades, if not centuries. The Journal also noted that tribunals at the Hague following the Second World War forced Germany and Russia to return items looted from private art collections. But the 1954 Hague Convention and the 1970 Unesco accord banning traffic in stolen antiquities do not cover property that was looted before the WW2. As most of the highly desirable national treasures found their “foster homes” long before the Second World War, Emily Teeter, an Egyptologist at the University of Chicago's Oriental Institute explained, the legal framework regarding antiquities repatriation is at best “murky”.

The Slatest blog at Slate magazine was quick to point out that had they had force, attitudes of repatriation would have brought “Elgin to losing his marbles”, long ago. The debate over the marbles that Lord Elgin brought from the Parthenon in 1811, has raged over many lifetimes. Greece has long wanted the marbles back but, so far, the argument that Elgin “negotiated for the marbles” (meaning, he did not strictly steal them) has kept them in the UK. It has also been said that the marbles would not have been well looked after or even have survived at all had they stayed in Greece; England should be allowed to keep them because they have treasured them.

Back in March, Daniel Korski reignited the debate over the marbles in the Spectator. Korski argued that they should be returned to Greece, above all, because it would make the Greek people so happy. According to Korski, it would increase national unity in Greece and strengthen the popularity of Prime Minister George Papandreou. “[He] will only be able to reform his country if he is strong; he will only manage to stabilise Macedonia if he is popular – and only reform and stability will prevent the problems [in Greece] getting worse.”

But “should” is not “must”, and the British Museum shows little signs of following the Met's example any time soon. So, in the absence of legal legitimacy, reported the Journal, Hawass “has two primary weapons at his disposal: rallying public opinion and denying institutions the right to conduct digs or research in Egypt.” If you can't get back what's yours using the law, then you have to get stubborn.