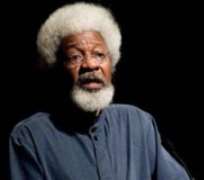 NIGERIA in its post-1998 years has been marked by a gradual descent into lawlessness and the rule of law has become relegated, Nobel Laureate Prof. Wole Soyinka, warned at the weekend in New York.

Soyinka, who received the Lifetime Achievement Award of the Nigerian Lawyers Association (NLA) on Saturday night, stated that 'we are now in a democracy, but the past years are some of the worst the nation has ever known.'

He said those years represented the most 'abysmal' regard for the rule of law from the 'very apex' of government, lamenting that the 'judiciary has been treated with absolute contempt.'

To this end, the international playwright noted that Nigerian lawyers both at home and abroad had a lot of work to do to reform the law and redress the situation.    'Years that followed the military in Nigeria have been some of the most lawless ones in the country,' resulting in an abysmally low rule of law adherence.

Soyinka said the judiciary had become so relegated that former president Olusegun Obasanjo subverted the law when the Federal Government ignored the Supreme Court's ruling in the case brought by Lagos State on the issue of revenue allocation.

The situation was so bad, he recalled, that the late President Umaru Yar'Adua had to reverse the decision of Obasanjo who had failed to carry out  the Supreme Court's ruling.

The Nobel Laureate said 'even the military pretended then to obey the law, in a hypocritical way,' but added that an exponential degree of corruption started then.

His words: 'Today many judges can be bought for a penny. We know cases where judges have been bought for half a million naira!'

Making a very copious reference to retired Justice Kayode Eso, Soyinka said the legal luminary sat on a panel that reviewed the conduct of judges and the panel confirmed some of such serious issues of concern.

Justice Eso had also been expected to receive the NLA's Law and Justice Award but could not make the event due to last-minute exigencies, according to organisers of the award.

Citing some examples, the international playwright said a judge in Nigeria cleared and acquitted former Governor James Ibori, 'without a blink,' someone who is wanted, of all over 147 criminal charges. 'I never know someone who is more wanted than Ibori,' the Nobel Laureate said, adding that the 'judge dismissed all the charges!'

Giving another example, Soyinka told the audience made up of United States-based Nigerian professionals including lawyers, doctors and journalists that another judge was found 'flagrantly exchanging text messages during the hearing of a case before him with one of the counsel.'

The same judge he added did the same with one of the litigants as well, Soyinka stated.

According to him, 'I do not know any situation that brought such a shame to the nation,' regretting that no attempt was made to dispute these, referring to the judge who was exchanging the texts.

Also referring to his personal experience as an individual who brought two libel cases to the court, Soyinka observed that 'I have two libel cases going on in court for over 15 years now.'

He said: 'We are no longer under military rule, we are all bound by the law. We must have a law reform, the judicial process has to be reformed,' so that people do not take matters into their own hands.

Earlier, Soyinka praised judges like Eso, who was the judge in the case against Soyinka about five decades ago when he was charged by the then Western Region after allegedly holding up a radio station over election rigging in Ibadan amidst political turmoil in the country then. Eso acquitted and discharged Soyinka in that case even after pressure had been mounted on him by the then government.

Soyinka said he admired Eso, not because he set him free, but because of his courage and forthrightness.    According to him, 'anywhere Justice Eso is, and I can be, I make it a point of duty to be there.'

Recounting how the then Deputy Premier of Western Region invited Eso to pile pressure on him against Soyinka, the Nobel Prize winner said Eso told the Deputy Premier 'that the only advice I can give you, (I am not supposed to be discussing the case with you,) is to get a good prosecutor.'

Taking the account from Eso's book about the case, Soyinka told his audience in New York that when the Deputy Premier insisted on assurance from Eso, the judge simply left the meeting, taking along the bottle of the wine with which the Deputy Premier had entertained him.

Soyinka also disclosed that at that time, there were people in the then telephone exchange that would often connect him and the late Chief Bola Ige with conversations and plans of those he called 'opposition, the other side,' where they were alerted to their plans by listening to their phone conversations.

He said it was through such telephone exchanges that he knew the premier himself tried to 'bully' Eso in a phone call to get him to convict Soyinka of armed robbery charges, which carried a life sentence, but Eso simply responded: 'I am sorry, I will administer justice.'

The renowned writer, who said he later told Eso of the phone conversation, said there was a 'dramatic symmetry at work' in the effort of the NLA to honour both himself and Eso on the same platform, observing that 'I could not allow that to be passed over.'

He praised the lawyers for holding their own in the U.S. and urged them to contribute to the reform of the law in Nigeria. In introducing Soyinka for the award, a former NLA President, Shamsey Oloko, described him as an advocate of the people, an activist and the conscience of the nation.

Receiving the award, Soyinka said he accepted it with great delight but corrected the claim in the event programme that he obtained a doctorate at the University of Leeds, saying jokingly he was only a 'D.D.' (doctoral dropout).