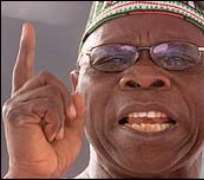 In a bizarre move to finally dump the Halliburton report that indicted highly placed political figures in Nigeria, some of the principal actors in the bribery scandal would now serve as prosecution witnesses, pointblanknews.com can report authoritatively.

advertisement
The move if allowed to sail through will prepare the ground for a slap on the wrist judgment for the political heavy weights who actively participated in the legendary Halliburton bribery scandal.

This is even as fresh facts have emerged why, Bodunde Adeyanju, a former Personal Assistant to  Ex President Olusegun Obasanjo, decided to act as the fall guy in the $180 Million Halliburton scandal, when it is clear the former aide took orders from someone of a higher calling.

This is coming on the heels of why the report of the Okiro Presidential Panel set up to look into the allegations of bribery of top Nigeria officials by Halliburton, and  another report sent by the Economic and Financial Crime Commission (EFCC) to President Goodluck Jonathan are yet to see the light of the day. The whereabouts of both reports is currently a mystery.

Shortly after inaugurating his Advisory committee, the chairman, Gen. T.Y Danjuma told the then acting President Jonathan not to ignore the Okiro report, but few months after, pointblanknews.com learnt , Danjuma has been "properly briefed" on the implications on the party and the Presidential ambition of the President.

Adeyanju is facing a string of charges at a Federal High Court Abuja for his alleged involvement in the Halliburton bribery scandal. He was alleged to have received whooping $5 Million cash while working as personal assistant to Obasanjo.

Pointblanknews.com learnt that the EFCC report on the N2billion car scandal indicted Speaker Dimeji Bankole, and his deputy, Nafada. Although EFCC sources hinted that the report had been sent because it involves the speaker, the Federal Government receipt few months ago.

Shortly after the United States Federal Bureau of Investigations (FBI), linked 80 names, including those of prominent Nigerians to the scandal, the Umaru Yar"Adua set up a Presidential panel to investigate the matter. It was headed by former police Chief Mike Okiro. The panel included EFCC boss, Farida Waziri, and officials from the offices of the National Security Adviser (NSA), Director-General of the State Security Service (SSS), and Nigeria Intelligence agency (NIA).

The report established that Obasanjo, Kupolokun, Obaseki and Atiku got $74 Million (N1.77 Billion) from Halliburton between 2001 and 2003.

The report and investigations by the EFCC and the police also concluded that Adeyanju received $5 million in three tranches from agents of Albert Stanley, CEO of KBR, a subsidiary of Halliburton. Pointblanknews.com sources hinted that even though he consistently told investigators he got the cash on behalf of the Peoples Democratic Party (PDP), it was clear he acted on behalf of his boss.

According to our sources, Adeyanju had been schooled by his boss and some top PDP officials on the implication of admitting he acted on behalf of Obasanjo. It was also learnt that being the chairman of the Board of Trustees (BOT) of the PDP, and one of the pillars for the Jonathan's 20011 presidential project, it was expedient to allow Adeyanju take the fall.

It was learnt that two other front men who are taking the fall for the big names are former MD of defunct Nigeria Airways, Air Marshall A.D Bello (Rtd), and former permanent Secretary, Ibrahim Aliyu. While the former's account was used to disburse $150 Million, the foreign account of Aliyu was used to move $11 Million of the Halliburton bribes.

Pointblanknews.com gathered that the calculation is, kill the Okiro report, use some of those indicted as prosecution witness, prosecute the middle men, and later give them soft landing. As it stands, Obasanjo"s aide faces maximum of 2 years or a N250, 000 fine or both.

Some of those who played prominent roles in the movement of funds, but are now FG witnesses include Etiebet and Obaseki.


According to our source “it was clear they received the cash on behalf of more powerful people. But since they used their accounts, while some like Adeyanju got cash it wasn't easy pinning it on the big ones. How could a P. A collect $5m cash and say he did it on behalf of the party. The Yar"Adua government didn't expect such from the Okiro panel, so when it was sent they sat on it. Then came Jonathan as acting president. He too had no choice but to ignore the report. If they decide to go after IBB and Atiku, then Obasanjo, chairman BOT goes down as well as so many top party men. So they decided to hang out to dry the likes of Adeyanju, Aliyu and Bello, who will eventually get soft landings. You must also know that the federal government has an interest. Even with the Okiro report we can get an indictment..."

The source continued “the same also applies to the Speaker and his deputy. The report clearly indicted them. They have the report, but because the political implications of their removal and prosecution, they have decided to sit on it"