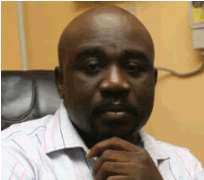 Tajudeen Adepetu
Come November 20 at the Expo Hall of Eko Hotels in Lagos, the third edition of Soundcity Music Video Awards (SMVA) will hold amidst glamour and fanfare. The leading showbiz awards created by Tajudeen Adepetu promises to be spectacular with a focus on the African entertainment industry.

Explaining this year's SMVA which parades top artistes like D-Banj, P-Square, Banky W and others on the list of nominees, Adepetu said the awards this year will live up to its billing as the best of its type in the country.

Adepetu who is also Executive Producer of SMVA and the MD/C.E.O, Consilidated Media Associates said SMVA aims at rewarding excellence in the art of creativity, particularly in the production of videos. Also, SMVA was born to give a platform and equal opportunities to the various talents that Nigeria has recorded over the years.

Adepetu who is fondly called TJ veered into the music industry as a radio jingle producer and had the opportunity of meeting a lot of upcoming and aspiring artiste seeking platforms to showcase their talents. He then resolved to provide assistance to burdened creative talents in the entertainment industry.

The first SMVA was a mind-blowing event, which was described as a dream come true for the organizers. It received worldwide acceptance by key players in the entertainment industry and brand acceptance by the general public.

It was hosted jointly by Nigerian pop star D'banj and city-diva, Ashionye. The maiden SMVA was transmitted live to over a 100 million viewers across Africa. The red carpet was full of glitz, pomp and ceremony. It was a night to be remembered for a long time. The event had several international artistes perform. American hip hop star Nas performed and also presented an award to Ill Bliss as the Best Hip Hop Video winner. South Africa's popular band Freshly ground also mounted a spectacular performance. Tic Tac flew in from Ghana aside performances from D'banj and the Mo'hits crew, Psquare and others.

Mr Adepetu recalled with nostalgia how humbled and awed he was by the acceptance of the general public, as he hinted that there were no criticism of any kind, which he was not unconnected with the fact that the mother brand Soundcity doesn't ask for any form of payment from the artiste to air their videos and obtain equal air time.

Like every organization, SMVA has recorded its own successes and achievements. SMVA is currently positioned as Africa's biggest music video awards; a feat which was achieved with a number of challenges. Mr Adepetu and his team have very creative ideas planned for every SMVA, but he bemoaned the lack of available creative talents to express his ideas as originally conceived. According to him, Nigerians are highly creative or talented but SMVA will be exploring all options and bringing creative hands and talents from across Africa.

Aside creative interpretation, Sponsorship has been another challenge the SMVA team has faced to execute a world-class event as planned. The last awards were supported from the purse of the company thereby limiting the expansion of the brand and the standard set to make it at par with its foreign counterparts.

Nevertheless, SMVA has set a standard in the African entertainment industry such that the criteria for nominations and the awards are based on creative execution and value employed in the expression of that creativity. The criteria for nomination are based on a wide pool of videos, depending on the best category fit for a nominated video and then filtered through several screening procedures with various panels that cut across different disciplines in the production of a film/music video. Also various angles are also considered such as Story/Storyboards, camera angles, production, film quality, authenticity and innovative. The winners are subsequently picked by skilled judges who are seasoned professionals in these fields with the mastery of technical expectations.

Soundcity Music Video awards also called SMVA which debuted in 2008 with its first award has come a long way. The growth and evolution of this brand have been noteworthy as it continues to seek innovative platforms and avenues to consistently project the Nigerian entertainment industry alongside its foreign counterparts.

Soundcity TV, which is the parent brand of SMVA is one of the brands of Consolidated Media Associates, a company that focuses on producing and syndicating programmes across Nigeria. Soundcity TV is the first of its kind in Nigeria and has now become a household brand. It has equally been positioned as a dedicated 24-hour music channel that gives the Nigerian artistes a veritable platform to project their image, while also contributing positively to the Nigerian music industry.