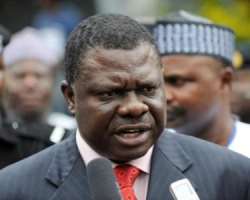 
ABUJA, Oct 10, (THEWILL) - Disgraced former Attorney General of the Federation and Minister of Nigeria, Mr. Michael Aondoakaa today decried his present ordeal and declared that he is simply ‘a victim of campaign of calumny’ adding that in spite of his ordeals, his faith in Nigeria and the judiciary remains unshaken.

Aondoakaa’s reaction was via a statement signed by his Special Assistant, Onov Tyuluugh and made available to THEWILL in Abuja. The statement is his first reaction since he was stripped of his SANship by the Legal Ethics and Privileges Committee.

The embattled former SAN said he is a victim of 'an orchestrated campaign of calumny' because he enthroned the culture of rule of law while in office as the country's Attorney General and Minister of Justice.

According to him the recent allegation against him by a national newspaper that he ‘snatched somebody's wife’ was part of the campaign which he threatened to challenge in court.

"Aondoakaa was a public officer who, while serving as Attorney-General and Minister of Justice, enthroned the culture of Rule of Law in this country. Despite the orchestrated campaign of calumny, Aondoakaa's faith in this country and in the judiciary remains unshaken. Aondoakaa firmly believes that, every evil done by man against man will be redressed, if not by man, certainly by God. If not now then, certainly later" the statement said.

On the allegation that he snatched somebody's wife, the statement stated that 'Aondoakaa has never ever met nor ever set his eyes on the woman that is the subject of the story'.