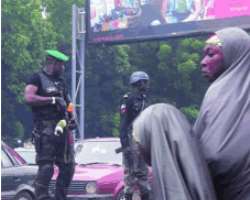 Securitymen in Maiduguri
Nigeria's golden jubilee anniversary was marked with fanfare in Borno. For three days, the state government held several ceremonies laced with cultural activities to the admiration of residents.

But the euphoria was truncated by gunmen who resurfaced in the serene city of Maiduguri, the state capital, and re-awakened the consciousness in residents that the serial killings that started early July were far from being over. Expectedly, the excitement of residents arising from the celebrations, after weeks of a partial curfew, suddenly gave way to apprehension, angst and uncertainty.

'Who is the next target?' a senior government official, who preferred anonymity, asked when he spoke to Sunday Sun just as his aide added a poser: 'Who will not be afraid when three people were shot in their residence within three hours?'

The tone of his reaction underscored the unease that has permeated the entire state since unknown gunmen fingered as returnee Boko Haram members launched serial attacks on the police and other persons.

A rather unusual incident, however, occurred last Wednesday. The National Vice Chairman (North East) of the All Nigeria Peoples Party (ANPP), Alhaji Awanna Ngala, was mowed down in his living room about 8.30pm in the presence of his family members. He was killed barely three hours after a police sergeant and a Civil Defence Corps member were shot at the residence of the speaker of the state House of Assembly, Hon Modu Goni.

Sunday Sun gathered that Ngala, who was the immediate past chairman of ANPP in the state, had just returned to Maiduguri from Abuja and had gone out on the fateful day to see friends, relatives and political associates.

But shortly after he drove into his residence located at Simari, about four gunmen, who had apparently being on his trail, stormed his living room and broke a very unpleasant news: 'We have come to kill you,' a family source disclosed. Ngala, according to sources, pleaded with his assailants to take his money and other valuables rather than his life. Regrettably, the gunmen were said to have insisted they were there to take his life and subsequently sent him to the world beyond.

'Nobody knew when the gunmen entered the premises and gained access to his parlour. We just heard gunshot several times; I think about six times and everybody was afraid to come out. After few seconds, the people disappeared and nobody was bold enough to give them a chase,' a family source said.

Victim of politics?
Not many in Borno believe Ngala was killed by the Boko Haram sect. In fact, quite a few said the ANPP chieftain was the first causality of the high-wire politics playing out over the choice of a governorship candidate for the party.

Alhaji Mash, a party supporter, maintained the killing of the ANPP chieftain was a prelude to what could happen in the 2011 governorship tussle. Although Governor Ali Modu Sheriff has been keeping the succession game plan to his chest, a few stalwarts of the party believe Ngala was his preferred candidate for the forthcoming gubernatorial contest.

'I can confidently tell you that Sheriff wanted the man to succeed him although it was not public knowledge. He was my friend and I remember he shared this with me once. Sheriff wanted somebody who does not show ambition and a Kanuri man with calm disposition, and he found in him these qualities. We spoke on the matter recently and he was of the opinion that he must strive not to disappoint the governor,' a chieftain of one of the political parties confided in the reporter. Although Ngala had initially shown interest in the House of Representatives seat, he reportedly made a U-turn when he was allegedly asked by Gov Sheriff to prepare for the 'big seat.' Interestingly, he never betrayed the secrecy of the purported governorship ambition allegedly directed by Sheriff.

The unending killings
Three hours earlier before the gruesome murder of Ngala, gunmen suspected to be Boko Haram members stormed the residence of the Speaker of the House of Assembly, Hon Modu Goni, about 5.30pm and shot a police sergeant, Isa Omale, and a Nigerian Security and Civil Defence Corps (NSCDC) personnel, Corp. Hussaini Illiya, attached to the Speaker's house, leaving them in a pool of blood. The gunmen also snatched a Kalashnikov rifle belonging to the Nigeria Police.

This brought to eight the number of persons shot by the men. Sergeant Mohammed, a mobile policeman, was the first casualty as he was shot at close range in front of his house. Inspector Shettima Muatpha and Corporal Mohammed Ahmed were not also lucky as they were sent to untimely graves. In less than two weeks, a retired police officer was killed in Bama while the Bulami of Lamanti missed death by a whisker as he was shot on his thigh while preparing for the evening prayer but his associate was lucky.

Residents are still baffled over how the assailants succeed in beating security checks, especially in the state capital, to perpetrate the killings. Although the police have placed restriction order on the movement of motorcycles in the state, the Boko Haram members nevertheless remain undaunted in their mission. This is expected due to the poor security network and lack of sustained surveillance by the police. The stop-and-search initiative by the police was usually relaxed as soon as residents recover from each killing. Policemen on major highways often forget their mission as they concentrate more on collection of money.

Again, most areas in the metropolis are impassable making it difficult to trail the assailants whenever such a crime is committed. Sunday Sun gathered that the serial killers have been employing similar tricks to perpetuate their act. Usually in Babaringa or traditional attire with their guns hidden under their flowing gowns, the men ride on motorcycle to the scene of the killing. The Police Public Relations Officer in the state told journalists in Maiduguri that the killers employ the same tactics in executing their mission.

Implication for 2011 polls
The events in Maiduguri, no doubt, portend grave danger to the peaceful conduct of the forthcoming polls. Chief Levi Ozua, the state secretary of the All Progressives Grand Alliance (APGA), believes the development could heighten political violence in the state.

'It is sad this is happening in Borno because it has always being a Home of Peace but the recent development is gradually tearing the place into pieces. One just hopes the killings will not begin to have a political colouration. I am afraid the development could scare many from participating in the electioneering and political process,' he said.

The Commissioner of Police, Ibrahim Abdul, had held several meetings with leaders of the political parties in the state, urging them to eschew violence and be tolerant.

Disturbed by the spate of killing, especially that of Ngala, Governor Sheriff, who left the state about five hours before the incident to honour the invitation of the Nigerian Embassy in Chad for celebration of the country's 50th independence anniversary, was compelled to cut short his journey to return to the state for the burial of the former ANPP chairman and his brother-in-law. With the purported threats of the Boko Haram not to hands off until a new government is installed, it seems the long days of agony and fear still lie ahead for the El-Kanemi people.