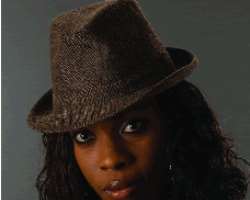 Joy Dickson
Joy Dickson is not a green horn when it comes to making movies. Born in Aba, Abia State in 1971, Joy dreamt of becoming a filmmaker as a teenager. Passionate and professional, Joy has worked tirelessly for years - during which she experienced the joy of childbirth of her two children. She directed many plays and the films, African Lilly and Mission to Africa in Nigeria before relocating to the United States. Between Kings and Queens is her directorial debut in America.

Scheduled for premiere in Lagos in November, Between Kings and Queens narrates the story of Kalu, a prince in West Africa, who leaves his native country for the United States, looking for freedom and opportunity. Instead, Kalu finds himself working for a local deli and sleeping on his cousin, Nanna's couch.

When Kalu crosses paths with the friend of a notorious drug lord in town, his journey takes him on a dangerous path. Enter Susan, a beautiful African-American woman who connects with Kalu as he becomes the target of the drug cartel and a pair of corrupt cops. On the run from both sides of the law, Kalu uses his creativity and stands by his ideals to overcome the challenges he faces in the land of liberty.

According to Joy, the film, which parades some Hollywood and Nollywood stars, was inspired by her own personal experiences. She says: 'The film explores varied themes such as identity, culture, and moral codes, as well as race relations between African-Americans and Africans. It was guided by Director of Photography Michael Morlan and features breakthrough performances by Dajuan Johnson, Nakia Burrise, and Nigerian superstar Jim Iyke'.

Here, Joy opens up on how it all started, her experiences while in Nigeria, her challenges and triumphs as a filmmaker. Excerpts:

Beginning
My interest in movies started a long time ago, for as long as I can remember. As a teenager, my dad used to buy a lot of films, and so eventually we had a lot of videotapes. I would sit down and watch a lot of Indian films, Chinese films, and horror films. As I was watching, I was imagining, Hmm, I wonder what this person was thinking while doing this. That's when I first realized I could actually write. So, my filmmaking career started way back in Nigeria.

Challenges in Nigeria
Piracy was a challenge. Also, the lack of proper film equipment in Nigeria was a huge challenge. I once saw a movie that was shot on a track and I was really impressed. But come to find out, that film was shot in Ghana. In Nigeria, when they wanted to create a tracking shot, they just used a hand held and I mean obviously, you can tell the difference. So, the technical know-how was definitely a challenge for most film makers. But compared to filming Between Kings and Queens in Austin, Texas, it was wonderful in the sense that I worked with people who had the same passion and who were willing to make a lot of sacrifices on set. Considering the amount of locations we needed and the budget, we had to manoeuvre around many obstacles. I was fully conscious of what I was doing. I was fully aware of my environment and I really wanted this movie to go a lot higher than my previous work.

On production quality
Production began in early summer of 2009. The SAG Signatory production was made for less than a half a million dollars. Thanks to the film friendly incentive in Texas, the production value of the film will not be compromised by the tight budget. The film was shot using the Red Camera at 4k, giving us the same breathtaking depth of field and selective focus found in film cameras, but with a more cost effective work flow than 35mm. The movie was shot on location in Austin, Texas.

Target audience
Between Kings and Queens is a film guaranteed to appeal to the masses. A love story set against the real backdrop of the war on drugs and controversial immigration policies, this film is set in the moment. Men and women in the prized 18-49-year-old demographic will be able to relate to our characters' struggles. They will find themselves wrapped up in the drama of the storytelling. One love…two countries…this is a story between Kings and Queens.

Most memorable moment on set
During production, we shut down an entire road to shoot a scene in Los Angeles. And thanks to Austin we were able to do it. For an independent film, we would not be able to shut down an entire street in Los Angeles. My memorable moment was when we were doing the roof scene. As I was writing the story, it was one of the scenes that I really, really wanted to see come to life. The moment I saw them on the roof, acting out that scene, was very beautiful for me.

My hubby, source of encouragement
Getting financed was one of the major obstacles. When we first wanted to do this film, the people that said they would come up with the finances were not able to pull through. Discouragement came then, but what could I have done? Keep on writing. My husband has been the single greatest encouragement I've ever had. The main thing that kept me going was the constant encouragement from him.

Using film to correct misconceptions about Africa
Many years ago, my friend Amade was two weeks away from graduation from film school in Houston. Then a fellow student said to her, 'I heard in Africa, you guys live in trees.' Amade said: 'Yeah, yeah, yeah, we live in trees. The rich live in tall trees and the poor live in small trees,' and the student said, 'Really?' Amade replied, 'Yes, you remember when Bill Clinton came to Africa? We kept him in one of the tallest trees!' The student still believed him, and said, 'Really?' I think you must be a fool to believe that. I mean, for someone who's graduating in two weeks, at least he should know a little bit more about the world he lives in. So, when Amade was telling us that story (laughter), my husband and I just laughed and laughed and laughed. Amade is now the main editor on the film.

Working with Jim Iyke
Funny, funny, funny. Jim Iyke was a very funny guy. He got the script days before he arrived on set and he knocked it off. It felt so good working with him. He made everyone crack up constantly while we were shooting.

Working alongside Morlan
My Director of Photography was Michael Morlan whose credits include numerous music videos and films, like the 2008 Oscar nominated documentary, Operation Homecoming: Writing the Wartime Experience. Michael was fantastic. He was very professional. He went the extra mile, he was willing to share extra time on set any way we didn't have a lot of time on our plate. Indie films never have enough time.

Future of independent film
Independent film is going to go a long way. I feel there is hope. In terms of independent filmmaking, you try as hard as possible despite having the idea in your head that you're competing with big studios. You try to tell your story in a very simple form for people to understand. That's why you're an independent filmmaker. Somebody's not telling you, 'you have to change this around to suit what we think is right'. The beauty of being an independent filmmaker is that you are able to tell your story the way you see fit. I heard with Tyler Perry, they were telling him to do certain things, but he felt like he wanted to tell his story a certain way, and he has done so well. As time goes on, I also think it will come to a point with the HD camera, that films will start being released in DVD form, not in film reel.

On upcoming projects
I'm in pre-production for two projects: Kameleon and The Preacher's Kiss. I'm still developing The Preacher's Kiss, but the script for Kameleon is done. I'm looking forward to this project because it is really going to define how far I want to go in this industry.