ACADEMIC TERRORISM IN OOU AND MANY SINS OF DANIEL 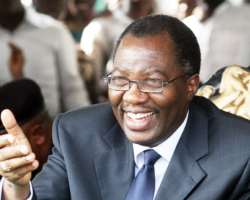 ACADEMIC TERRORISM IN OOU AND MANY SINS OF DANIEL "When the wicked reigns, the people suffer."

Months ago, the government of Ogun State, through the university governing council, with occultic Alex Onabanjo as its chairman, embarked on the mass sack of OOU university lecturers with different motives that are lucidly antithetical sectorial reform as claimed. The situation which has, in no small measure, affected the human resource required to teach us adequately as students. Now it is a declaration of war against the students and parents through various pixilated increment in fees. It is indeed a festival of academic terrorism in Ogun State. May we remind you of the fact that Moshood Abiola Polytechnic Abeokuta, is presently the most expensive state Polytechnic in Nigeria, forcing male and female students of the institution into various social vices – a visit to stadium in Kuto Abeokuta is an evidence of what students of the campus pass through to survive – many female students have turned to prostitute to eke out their precarious leaving!

The congress of all civil societies of the Olabisi Onabanjo University, Ago Iwoye Ogun State, therefore wishes to acquaint the general public of the looming crisis that may envelop the university soon following the proposal of the citadel’s authority, with the conspiracy of Gbenga Daniel’s administration, to again increase the fees payable by the students. May we inform you that if the current proposal is allowed to go unchallenged, the university will be the second most expensive state university after Osun State University, in Nigeria.

Here are the details of the proposed fees:

In 2006, when the university, on the instruction of the PDP government in the state, increased its fees by over 400%, Committee for the Defence of Human Rights [CDHR] OOU unit in a press release said ‘’OOU IS NOT FOR SALE’’ but now that the university is about being privatized, Mr. Gbenga Daniel needs to inform the people of the development. However, the can of worm starring us in the face is no any other issue than the inglorious motive and the intention of the power that be in Ogun State to astronomically inflate the already unbearable tuition fee being paid by the students of OOU. With the economy of the state remaining prostrate due to unbridled looting to the state till, it is clear that many will be raped of having higher education in their own land.

To us, the proposal lacks any moral justification and logical explanation taking into consideration the present economic woes that our parents experience in the state. We are equally aware of the intention of the ‘’eagles’’ to tactically withdraw our inalienable right to education by perpetually placing us on the verse of educational strangulation, thus incapacitating our race educationally. There is only one answer to this: NO.

It has also been brought to our notice that the Students Union Government Executive, under the leadership of Comrade Rufai Uthman A.K.A BEEKO has been promised some percentage to keep mute while the university will be moving at the top gear to sustain the increment starting from next session 2010/2011; but the union has since turned down the offer, However, since man is unpredictable, we are equivocally echoing it out loud that any attempt to compromise to this obnoxious and skyrocketed increase will lead to maximum shishi from the mass of the students.

The 2009/2010-registration palaver is still on ground, yet, the University authority, have monstrously resolved to add salt and pepper to our wounds. The irony of the whole drama is that the founding fathers of free education are from Ogun State - the idea of first state university and free education were conceived here - that is the reason why we are putting it before the ‘’class eagles’’, who have mostly enjoyed free education, to tell us if they can defend their motives before Chief Obafemi Awolowo and Olabisi Onabanjo if they were alive. Where is Awoism in Ogun? It is on this ideological premise that Gbenga Daniel has sinned against God, prosperity and man in the state. This must not be allowed to stay as we await how the pseudo activists, reactionaries and nauseating claimants of Awoism in Ogun bourgeois government will rationalize this gubernatorial criminality.