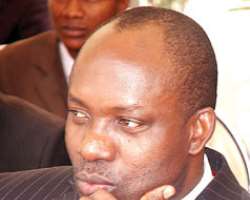 Chukwuma Soludo
The police in Australia have been told how the Nigerian currency notes, the naira, were printed illegally by a firm in that country during the era of Prof. Chukwuma Soludo as the Central Bank Governor. Soludo was replaced last year by Lamido Sanusi.

An Australian newspaper, The Age, reports that three former workers at The Reserve Bank of Australia's currency firm, Securency, told the police that the firm produced millions of partly made Nigerian banknotes without authorisation from the Nigerian authorities, a practice former staff of the firm described as effective counterfeiting.

The newspaper reports that the Australian Federal Police, AFP, have been investigating Securency for the past 17 months over its alleged bribery of foreign officials, including Nigerian and Vietnamese officials, to win contracts in these countries.

The Australian Federal Police were told by three former staff members that the RBA company produced banknote substrate – the unique base material used to make banknotes - belonging to at least three countries, including Nigeria and Vietnam, without formal orders from their central banks.

Government sources have said that among the potentially explosive evidence uncovered by the AFP are documents suggesting a senior trade official engaged in highly unethical behaviour to help win Securency contracts overseas.

Ministers, including Treasurer Wayne Swan, and RBA governor Glenn Stevens have repeatedly refused to comment on the scandal. Securency's board is chaired by an assistant bank governor.

The AFP has been told by former Securency employees that the unauthorised banknote substrate was stored at the company's Craigieburn headquarters or off-site – including at a facility with poor security – in the hope that it would eventually be ordered.

Three former Securency employees aware of the practice, and who have all given statements or been debriefed by the AFP, said the practice was highly improper but was done so the company could falsely claim it was meeting production and sales targets.

When P.M.NEWS contacted the Coporate Affairs Head of Central Bank of Nigeria, Mohammed Abdullahi, this morning, he said “it was impossible,” adding that the report “is sheer balderdash.” He declined to speak further.

Due to fears of counterfeiting and currency manipulation, firms that make banknotes can usually only do so after receiving an order from a central bank.

The unauthorised substrate production also suggests that the senior company executives who ordered it did so because they may have been aware of corrupt back-room deals struck with foreign officials who had promised to make future orders.

In an AFP witness statement, one of the former employees stated that they had been told by Securency managers that doing an unauthorised print run ”would constitute counterfeiting”.

Despite this, the witness said that they were told in 2008 to begin the unauthorised Nigerian substrate production using an expired production order number.

The AFP statement says: ”Substrate was never produced without a valid customer order. However, on one occasion during August or September 2008, production received a direction from (chief executive) Myles Curtis to produce substrate for Nigerian currency, the 20 naira denomination, in the absence of a customer order.”

The employee said that staff protested several times about doing the unauthorised print run on the basis that it was highly unethical and potentially illegal. But they said that Securency management told them that ”the production would go ahead regardless”.

In the police statement, the witness says they believed that the unauthorised print run was ordered so the firm's board – which includes senior RBA officials, including deputy governor Bob Rankin – could be told the company was meeting sales and production targets.

”I believe that the decision by management to produce substrate without an order was made on the basis that the second production line was operating below capacity,” the AFP statement says.

The witness statement also reveals that Securency stored the Nigerian substrate in a facility with poor security, a concern shared by two other Securency employees.

”On several occasions, I raised concerns about what I regarded as the lack of security at the storage facility where the Nigerian substrate was stored. I also had concerns about the transporting of the substrate.”

The witness states that dissent was not tolerated at Securency. ”Securency was tightly controlled by a clique of senior managers. If an employee was outside of this clique and questioned company practices, he or she would likely be quickly terminated.”

Two other former Securency employees told The Age they had spoken to the federal police about their concerns that the company had engaged in quasi counterfeiting.

The AFP refused to comment on its inquiry into Securency, which features 20 full-time officers and spans several continents. It has previously stated it is examining whether the firm's executives engaged in foreign bribery by paying multimillion-dollar commissions to middlemen Securency hired to influence foreign officials to give the firm banknote contracts.

Securency managing director Mr. Curtis and company secretary John Ellery departed earlier this year after the RBA conducted an audit of Securency's activities that found almost $50 million had been paid between 2003 and 2009 to overseas middlemen.