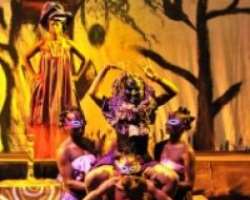 Thus goes the evergreen theme song of Oluronbi. The folklore, like Abraham's story is one heavy with promises to be kept. Oluronbi is the last wife of the king of Idi-Iroko. Barren and desperate, she seeks the help of Iroko, offering a gift too lofty – to give back the child when her prayers are answered! When the time to fulfil her promise comes, unlike Abraham, Oluronbi cannot let her daughter go. She rushed down to Iroko to try to 'negotiate'. He takes her daughter anyway, for even Abike has promises to fulfil in Hades!

The play is an awesome watch with almost no blemish. It adheres to the myth, but a few modern twists put a spark in the tale, bringing it into the 21st Century. The attires of Abike and Oluronbi, for instance, on the day they are to welcome Abike's suitors, is European.

The play's subtle use of English, Pidgin, and Yoruba is at some points comical, and at others poignant. It brilliantly passes across the message in a manner that is true to the folklore. The suitors come with Nigerian cultural idiosyncrasies and nuances to seduce the princess, and the heavily Yoruba-accented English also works well both in poetry and conversation with words like 'comu' instead of 'come' and 'oloris' instead of 'queens'. The clever sarcasm of the king's other wives also brings to mind the witches in Macbeth. The trio mock the king, like Sadiku in Soyinka's Lion and the Jewel – apparently his potecy has dwindled since Oluronbi.

If by any chance Oduduwa was in the theatre, he would have been impressed by the dance and music which was flawless. The stage lighting also helps to convey the message of the tale, with red spot lights when the mood is grim, yellow lights for light moods, and blue lights when the atmosphere is sensual. Particularly enchanting is the 'ewi', recited in a high-pitched feminine voice, which reminds the audience of the resonant beauty of the Yoruba language.

At the climax of the play one almost forgets that Abike is taking her walk of death – as she walks away softly there is no blood, scar or tear on her skin. Instead, villagers dance, sing and rejoice. However, the audience is made to feel the full impact of Oluronbi's loss – one will almost shed tears of sympathy as she weeps.

The tale of Oluronbi comes in good time, now that Nigeria's elections are around the corner and promises are floating in the air. Iroko is telling all the politicians to fulfil their promises, or else!