“ I am suffering and need help”---Prince James Uche, a.k.a Odigbo 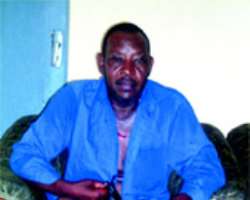 Prince James Uche, a.k.a Odigbo who is/was a top Nollywood actor but recently struck by a strange ailment. He tells The Source his present state, that can only be described as pathetic

You were at one time one of the biggest names in Nollywood. But for a while now nothing has been heard from you; what happened?

Well, let me first of all introduce myself the way I understand. My name is Prince James Uche. I am a native of Abia state. I am an actor. I know I have tried my best in acting. Right now, I can't remember the genesis of how it all started, but I have been in the industry for about 16 years. Presently, I can hardly walk. I have been asking for help from good-spirited individuals, not just Abians, because I have spent all that I had. These days I beg because I want to retain my leg.

What is really wrong with your leg?

Well, I just noticed that I had a slight bruise on my left leg last November when I came down from an okada (commercial motorcycle) at Anthony (Lagos). March this year, it had gone worse. My last movie shot during that period with Nkem Owoh, entitled Enemy of Progress was done with the pain. Around that March, my legs started swelling and I went to the hospital. I was on admission for about two months, thinking that the leg was getting better. But it did not. That was when I started crying out. People often think that actors are rich but it's not true. I am a father of three boys; the first just entered Senior Secondary School three class (SSS 3) and the rest are close behind. The demands are quite cumbersome and this injury is not making matters easy. I have been alone. I have been going to different hospitals, and as you can see, my case is not getting any better. I think I have diabetes now. I know I have shortage of blood- while in the hospital I took six pints of blood. I do not know who is 'drinking' it.

Indeed, I can see a big wound on your leg. Has any of the doctors been able to diagonise what is wrong?

Yes, they have. They said it's cancer of the leg. Now I don't know how I can cure it.

Some people recently attributed your present state to some of the movies you appeared in. They said you played too much of spiritual roles. Do think it has anything to do with it?

In the first place, I am a set designer before an actor. I love doing it. I have never believed in this spiritual stuff and have never had an encounter with them. I am a child of God . I am a Catholic and I insist that my kids must serve on the altar. They are all altar boys as I speak. One of the biggest films on the Catholic Church in Nigeria today was done by me. I was the producer. It was entitled Avenge me, Uwele My son. It's about Blessed Father Tansi.

I heard also that you were once a model before joining Nollywood.

Yes, that's true. I came back from Germany to Nigeria in 1994. After modelling for a very short period, I joined Nollywood. I found myself in the movies. I was a former National Vice President of the Actors Guild of Nigeria and I was the one who created the state chapters of AGN you still see till today. No addition has been made till date.

So, how many movies have you appeared in all of those 16 years?

I can't name them, but all I know is that I have been part of every strong movie made in Nigeria starting from Rituals in 1997, Oracles, et cetera. I can't name them in this condition I find myself. I can't remember

But you were mostly known as Odigbo. Why?

Odigbo was a film I did in maybe 2000 or 2001. The title of the movie was actually condemned and my character in the movie bore the name. Somehow, the character took over my real name.

Ever since you took ill, have your colleagues come to your aid in any way, or did they simply desert you?

To be truthful, they have responded to my call. The AGN, Lagos chapter under Ernest Obi has come to my aid. Even the two national presidents have come, but it's like Segun Arinze is the one carrying the burden. Emeka Ike responded as an individual, but Arinze did as a President would. The Marketers too have been wonderful, because when I had a bill of N106,000 to pay, the Marketers took it up. The only people who did not respond are members of the Association of Movie Producers (AMP). I put this association together, I called the meeting. Today, we hear that artistes die here and there. It's not because they want to but because they can't afford to stay alive. If my leg is finally amputated, it will be because of lack of money. Maybe, I should just say it is my luck that this is happening. Maybe I stepped on something but all I know is that I never offended anybody. I always like being on my own. People might think Pete Edochie and I are so close based on our frequent appearance of TV together, but all this while he has called me only once. When my friend went around begging for money for me, he sent just N20,000.

I want him to call me. The Catholic movie he is selling today was produced by me; I did a thorough research and he was surprised at what I came out with.

So, what has been the effect of your illness?

As you can see, I now live in my friend's house. School resumed today (21st September) and I have to look for money for my kids. I lost my house. How my wife is managing with the kids, only God knows. She is a seamstress in Gbagada. She didn't run away from me, it's just our present condition that keeps us apart, but they come to see me. There is nothing I can do but pray for her and my kids.

From what I gathered about my age, I should be 48. I do not have any data, but my mum told me the period. She also said I was only three months old when my father passed away.

Has there been noticeable improvement in your condition?

Well, the doctors may say it is improving today but next week, it would swell again. My blood pressure is still high. I want to be well again and I do not want to go and see any native doctor, that is why I put my faith in God. Recently, I was told in the Church I attend now that what is wrong with me is spiritual. The Prophet said there are living things in my leg.

What is the name of the Church?

I can't remember. You know I just joined. But the name of the man in charge is Prophet Samson. He is located in Satelite town Lagos.
Apart from some of your colleagues, have you had help from other places?

I was in a difficult financial position so I sent a text (SMS) to my governor, Theodore Orji and he responded well by paying my hospital bill the last time I was on admission. He has not seen me physically, but he did it and I pray when I get better I will visit him. A few media houses have carried my story, but to my surprise, I have not heard anything. I still ask my governor for help. I sincerely need help. I have fainted in this house three times and the fourth one was in the hospital. Nobody attends to me, that is why God will bless this friend that said I should come and stay with him. He is from Anambra while I am from Abia. I don't wish my enemy what I am going through. In the afternoons I don't sleep because of pain. At night, it is even worse. I need help from people, especially my eastern brothers and sisters. I am not a small actor because I know nobody would say they don't know my name. I don't know why people are not responding. My biggest pain now is about my first son. He is just 14- and already in SSS 3. He is taller than me and already close to 6ft. He said he wants to be a basketball player, but how can I ... (he starts weeping bitterly, so the interview had to stop).