12 READY TO BATTLE FOR GUS 7 GLORY 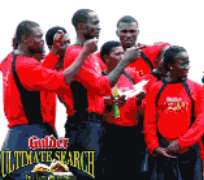 The selection party was part of activities lined up to kickstart the highly entertaining television reality show, powered by the Gulder brand, from the stables of Nigerian Breweries (NB).

The event which was held under the ambience of fun and conviviality, took place at the main hall of the Lagoon Restaurant, Victoria Island, Lagos, amid grandeur. In a dramatic twist, the over 600 guests including, celebrity journalists and Nollywood stars were more than surprise, when Cool FM radio presenter, Freeze, who anchored the event, announced 12 instead of 10 usually selected for participation in the television reality show.

Out of the seated 41 young agile, forward looking men and women shortlisted after a three week rigorous search across the country, 18 of them were called on stage. The moderator, under the watchful eyes of guests and the organisers, was saddled with the task of pruning down the first list of 41 hopefuls to 18. His task became more difficult when he had to come up with the final list based on laid down criteria.

After engaging the 18 wannabes in mental tasks and observing other laid down criteria, Freeze, came up with the final 10 who at this stage were guaranteed a place in the celebrated annual search for fame, fortune and glory.

However, to the chagrin of many, the management of NB, through their representatives at the event, communicated to the moderator on stage, to keep hope alive for the 8 others who had failed to make the list. The moderator announced that, in the spirit of the 40th year anniversary of the Gulder brand in Nigeria being celebrated this year, the owners of the brand had decided to increase the number to 12, instead of the traditional 10 that usually made it to the jungle for the search.

For that reason, the moderator decided that the task of picking the additional two, would be shared with the guests, which included: entertainment editors from major national news publications, three past GUS winners, Ezeugo Egwuagu, Michael Nwachukwu and Uche Nwaezeapu ,. Popular music diva Mumma Gee and Nollywood actor and past anchor of the programme Bob Manuel-Udokwu among others were made to have input in the choice of the additional two.

At the end, a male and female contestant who had lost hope earlier were picked to join the 10 earlier chosen. Among the lucky finalists chosen on the spot are: Shehu Atiku from Edo state, Henry Ogarachukwu from Imo state and a host of others, all within the age bracket of 21 to 27. The 12 finalists will be taking to the undulating plains of the Ogun State Forestry Plantation Project, Area J4, Omo Forest Reserve in Ijebu East LGA, Ogun State to search for 21 days for the missing Gulder ultimate treasure.

The winning prize for the last man standing in this year search will go home with a cash prize of N7Million, N10Million worth SUV and N500, 000 wardrobe allowance, while others will go home with consolation cash prizes ranging from N450, 000 to N2.5million.