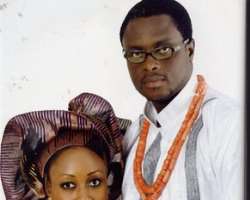 The two-year-old marriage between the daughter of business mogul, Chief Gabriel Osawaru Igbinedion, Gabriella Omosede and a Benin Prince, Aven Akenzua, has crumbled.

Residents of Edoyaye Avenue off Osawe Street, Etete, GRA, Benin City, were some weeks back thrown into panic when armed mobile policemen, said to be acting on the order of the Esama stormed the palatial mansion of his in-law (Aven) in two lorries to evacuate his daughter's belongings.

Aven, is a son to Enogie Uyieken Akenzua, the younger brother of the Oba of Benin, His Royal Highness, Oba Erediauwa and had against the wish of the Benin palace forged ahead and got wedded to Omosede, the eldest daughter of Lady Cherry Igbinedion.

The marriage produced a baby boy in 2009 and was widely celebrated by the house of Igbinedion in a grand style.
Although the reason for the separation is being kept as a top secret, a palace source who craved anonymity said the marriage probably crashed on the ground that the ancestors as epitomised by the Oba of Benin never gave their support and blessings as required by Benin tradition.

In what appeared to be a total disregard to the apparently disapproval of the Benin monarch to the marriage, Chief Igbinedion and Enogie Uyieken gave their son and daughter in an uncommon colourful royal traditional/church wedding on December 31, 2008 and January 5, 2009 respectively.

Consequently, the marriage was said to have triggered unprecedented vexation in Benin Kingdom as Oba Erediauwa eventually drew a battle line against his younger brother for daring to discard his advice.

The travails of Igbinediion, who has since been stripped of his Esama title by the Benin Traditional Council, started when without recourse to the Benin monarch, the traditional custodian of beads, single handedly gave out traditional beads to JP Patterson, former Prime Minister of Jamaica and co-visiting Aghantehene of Kumasi.
Igbinedion has since been declared “Oghion Oba” (Enemy of the Oba).

“The Royal Family and indeed all Binis are opposed to their sons or daughters marrying into the family of “Oghion Oba” Enogie Uyiekpen knows this. He was advised to postponed the engagement until Chief Igbinedion is granted pardon, Enogie Uyiekpen was aware that Chief Igbinedion plea for forgiveness is at present before the Omo N'Oba, but he ignored the advice for reason best known to him which made the family to snub the marriage,” a source said.
Tagged, 'Marriage of reconciliation' by Igbinedion, the union never ushered in the much-expected cordial relationship between the Benin palace and Igbinedion and was seen by many highly-placed Binis as an embarrassment to the esteemed Benin monarch.

Speaking with News Star, a top management staff of Independent Television (ITV), a broadcasting station owned by Igbinedion, who pleaded anonymity, said although he was yet to have a full detail of what actually transpired between the couple. He promised to get back to News Star which he never did.
“You know the man in question is a patron to the Nigeria Union of Journalists (NUJ). I will advise that you drop the story,” he said.

Another staff, who confided in News Star, said he also heard about the separation saga.
“We were terrified when we saw the heavily armed mobile police men, initially we thought it was a war situation, some of us ran for our dear lives,” said one of the neighbours of Prince Aven.