ATIKU, 14 OTHERS GET WAIVERS 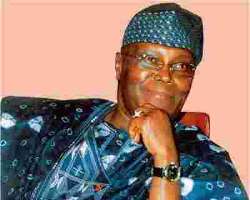 Former Vice-President Atiku Abubakar was among several people granted waivers by members of the National Executive Committee of the Peoples Democratic Party in Abuja on Wednesday.

With this waiver, the former vice-president is free to contest the party's presidential primaries.

The meeting also suspended the planned midterm conference and special convention of the party, saying that the election timetable was too tight to allow for that.