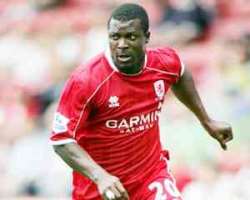 Yakubu Aiyegbeni
After losing their opening three league games, West Ham's hopes of avoiding a relegation struggle this season were dealt a further blow by their precarious finances preventing the purchase of Yakubu Ayegbeni and Marc Wilson during the transfer window.

While £5m would have bought Yakubu from Everton, only £3m was required to take Wilson, the Portsmouth captain, to Upton Park as Avram Grant, the manager, sought to strengthen his squad.

Under the Israeli, West Ham have scored only once in the league so far and their next match is the visit of the champions, Chelsea, next week Saturday, which suggests they could reach mid-September still pointless.

Following a net spend during the summer of £6m for the Mexico forward Pablo Barrera, the New Zealand defender Winston Reid and Lyon's FrÃ©dÃ©ric Piquionne, loan deals or the sale of an established player were Grant's only viable options for further recruitment.