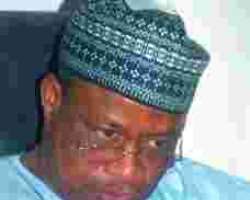 The famous Langtang military mafia of yesteryears is regrouping to foster the political fortunes of former Military President, General Ibrahim Badamosi Babangida (IBB), under whose tenure they blossomed. The group made up of largely retired military top brass now being led by Senator John Shagaya, met in Jos penultimate week to perfect their strategy for actualizing the return of their major benefactor.

Daily Sun learnt that the meeting, which was facilitated by the serving senator, was not specifically held under the aegis of the all-conquering group of yesteryears, but most of the retired military top shots were in attendance.

It was a move to counter the powerful presence of Jonathan's campaign machinery in the Plateau State.

We learnt that the existing faction of Peoples Democratic Party (PDP) in the state led by Prof Dakum Shawn is rooting for Goodluck Jonathan.

'We have our machinery very firm and intact. We have total control of the party down to every ward. The so-called regrouping military top brass cannot make any impact at the grassroots level. If you conduct any congress in Plateau tomorrow, I can assure you that Jonathan will surely win. We are not scared of their meeting said a top member of the party.

The status of the ruling party in Plateau is, however, contentious.

There are two factions. One is a caretaker committee set up by the national executive, but declared illegal by the state High Court, while the other said to be recognized by the courts, but not necessarily the national PDP, is operating in the state with the full backing of the state government.

The anti-Jonathan elements also, said to be at daggers drawn with Governor Jonah Jang, are mostly operating within the caretaker committee. It is believed that a large chunk of their members are also rooting for IBB and were present at the Jos meeting.

The Jos situation is posing a hard nut to crack for the national officials who are in favour of getting a fresh executive in the state. A fresh exco in Plateau may translate to handing the party machinery to anti- Jonathan elements, a move that may end up favouring the IBB camp.

National Chairman Dr Okwesilieze Nwodo is at the middle of the two groups, though he is said to be awaiting the outcome of an appeal to the initial ruling of the Plateau High Court on the matter.

Apart from General Jerry Useni, who is still nurturing his own political party and Gen Domkat Bali, known to be highly apolitical, most of the other retired soldiers have regrouped for the impending political battle in the state.

President Jonathan is scheduled to visit the state in September, ostensibly to commission some projects but insiders say he would use the opportunity to oil his machinery and ensure that everything is going on course.

Ahead of his visit, finishing touches are being put to scores of projects which commissioning will lend create a big boast to Governor Jonah Jang's political standing and re-election bid.