MY RELATIONSHIP WITH EBEREONWU — ANNIE MBAH 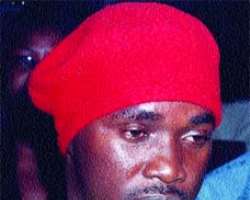 Pretty Annie Mbah has been one of the movers of Nollywood with activities in the acting, make-up and costume arena. Since seven years ago when she entered the industry with the aid of her elder brother, the sky has been the limit for her as she tries to contribute towards its growth. She makes an expose of her self and opens up on her relationship with Late script writer, director and producer, Ebereonwu

“I do so many things in Nollywood. I do make-up, costumes and sometimes I act as well.

I cope by God's grace. The industry is so large that you can fit into so many things if you have the grace of God and have the ability.

I do not want to be idle so I choose all of them. If there is no role for me to play, I could find a costume job to do or make-up to do. I have not failed.
Entry

I entered Nollywood seven years ago. I grew up to love entertainment so told God that I must pick up of place here. So when I came to Lagos, I had a brother who was actively involved in the business of writing of scripts and directing. His name is Akuma Mbah. However, I have an ace in make-up.

My first job of make-up and costume at the same time is Living in Danger. That was in 2000. I also did Golden Fish, Dry my tears, Salt and pepper by late EbereOnwu. I also did his last job which is not released yet. Indeed, that guy was a nice guy from whom I learnt so much.

I was devastated when his death was published. he was the only person who would always work with me. Whenever there was a job, he called me. And this was regular. he would say Annie come for your script.
Cliques

Yes, they talk about this clique issues but I do not want to worry myself about it because I believe I could work for anyone. I keep an open mind. I have also worked with Ikechukwu Onyeka and Kingsley Okereke. Nollywood is growing with a lot of future ahead of it.

I grew up in Aba and in the North of Nigeria.
Inspiration

My basic inspiration was Geneveive Nnaji. I was marveled at the young lady whom many say did not complete her secondary school ( I do not know about that) but speaks English so well and acts so well. I was very fascinated by her act so I got involved. I can say that her talents inspired me.

I have never been harassed by any one sexually or otherwise. I mind my own business and my work.

Please count me out. The Bible says it is satanic and I can't find myself in such mess. There are several men out there and I haven't finished with them yet to talk about pitching tent with same sex with me. I can't kiss my fellow woman.

I think life is in God's hand. I wish to live a good life.

The Nigerian movie industry will not die because there are several stars in the making. They are yet to shine so it has a great future. I only wish we continue to do it right.

Ebereonwu is a very creative director. He could shoot several scenes in one house and you think it was shot at several locations. Ooh that guy was highly creative. He was usually incharge without being overbearing. May his soul rest in peace. I also love and respect Ikechukwu Onyeka's attitude to work. He directed Dry my teams.