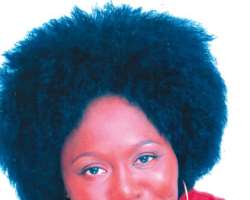 Her names are Amanda Uzonitsha but she takes Mandy as stage name. So, she is popularly known as c Mandy, just as she is recognized for her many parts. She is the first female to have gone into comedy after having done a stint in music. While a musician, her fortes were reggae and afro beat. She added acting to her quiver, featuring in the now rested Charley Boy Show.

According to her, it has been an interesting foray into the comedy world. However, Mandy will tell you that it has not been easy to be where she is today. This is more so because the male comedians get more jobs than the females, making it look as if one gender has the right to humor.

In spite of it all, she has remained undaunted. She has made up her mind to stay the course. “Someone called me and said I should stick to this profession. The person told me that I should stick here, that it will get better one day.”
Eighteen years after, she is still there and by her admission, it is getting better. While admitting the up side of it, she confesses that Nigerians' preferences make the job a bit off-putting. “Nigerians like swagger, they like show-off and I am a very humble and modest person.

“Then I am also born again. That again is a big problem in this business, because sometimes you are called to do certain jobs and you don't want to compromise your faith. So, there are certain things that affect me as a person.”

Again she bemoans the fact that certain practitioners have dominated the industry makes it quite difficult for those less dominant. According to her, when people are planning for an event, certain names keep coming up, names like Basket Mouth, Julius Agwu and those in that category. Then she queries: “Who wants to call Mandy? Nobody. It's just a few people who want to take the chance.”

Far worse is the vexing reality that many people do not just believe in females comedians. But she is grateful that other female comedians have started coming into the business. She started, she was about the lone star and people said she was “crazy. “They believed that when I get tired I would rest. But when they started seeing other females, they now believed the females could do it. People forget that no gender has the copyright to humor, every gender can make people laugh but the people that get the jobs don't want to call us,” she says.
Today, apart from making serious headway in comedy and getting called for jobs, Mandy is also a TV presenter. Currently she is the presenter of the programme Maggie Helele. For her, getting this job is another feather to her cap. “Maggie is a big brand and taking me on as a presenter shows that I have positioned myself well in the industry to be recognized by them.”

However, she says female comedians are not really having the best of times in the industry. “We are not making it. I will be truthful. People say they have a problem with me because I am not everywhere. When there is a gbo gbo ero (everybody's) show, they expect me to be there. I tell them that when I want to pay my daughter's school fees I don't go and meet the proprietress and crack jokes for her. I crack jokes to live, to eat.”

Female comedians, she opines, are not called all the time to do events. For her, the solution is, “if we could get jobs like our male counterparts are getting, I won't be crying and singing this regret song.” Mandy is a single mother.

For her, being a single mother can be very challenging. However, ishe says she is enjoying it. “I tell people that it's my daughter that motivates me to work. If I didn't have her, maybe I would have just relaxed and when the money comes it comes.
“When I had my daughter, I knew that I had to provide for her. I was alone and I had to carter for her needs. So the very first thing that hit me was that I had to take care of this girl and how can I do that, only by working. So she motivates me.” Taking care of her alone may not be easy but her mother's words gave her the push to go through the pregnancy and the birth. “My mother used to say: 'Carry the baby for nine months and when you give birth every other person will carry the baby for you. It might sound stupid but it's true”.

It is interesting to know that Mandy decided to be a single mother by choice. What inspired her choice for single motherhood? she unravels it: “I decided on my own to carry my daughter and keep her. Before I had my daughter, I had just left my husband and there was this story going around that I had blocked tubes; I couldn't give birth to a baby. There were lots of stories. I was troubled, very troubled because, yes I had one or two problems, but it was not as much it was being said. So, when the baby came, I was happy.”

Is she in anyway thinking of marriage since the first one left such a bitter taste in her mouth? Her answer is that marriage will only come in God's time. When that time comes, God will bring her ideal man who is a God-fearing person.
Right now she has a motto that guides her as it concerns relationship. “I have a motto, no sex, no nothing until marriage. If you want to believe it do, if not it's your business.” It's a difficult motto, but if you don't want to get into problem then this should be your motto.

Men have different reasons for loving a woman. A man will love you because of sex, and after having sex with you, because of their nature they want another girl to conquer. So he looks for another woman who will give him sex. While we women give sex because we have agreed to be with the man but that is not what the man wants.”

Growing up was fantastic for Mandy because her father was a big man in Guinness back then. The family lived in Benin so she grew up there. She agrees she was born with a silver spoon, but remains humble because of the biblical principles that her parents taught them as kids.

Mandy has a word for women out there who are wishing someone will help them realize their dreams. “The grace of God is on us but we need to wake up and work. Go out there and work, it will not fall from heaven.

People need to see that you are doing something; you are struggling before they reach out to help you. You need to stop sitting down and folding your arms as a woman. I did this for 18 years and I know one day it will be better than it is today.”