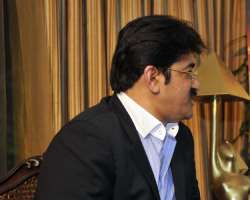 Noida: “I am thankful to the Government of Nigeria for appointing me as the Chairperson of Indo Nigerian Film Association” said Sandeep Marwah President of Marwah Studios who was conducting a meeting with the Nigerian students enrolled in AAFT Asian Academy of Film and Television and ASMS Asian School of Media Studies at Noida Film City.

This happened during the visit of Dr.Hyginus Ekwuazi the Managing Directoe/CEO of Nigerian Film Corporation, Nigeria and T.Benibo, Dy. Director, Head Film Development/ Commercial Service Department, Nigeria in the presence of G.D.Akpan, the Minister Councellor ( Information) High Commission of Nigeria in India.

The purpose of the organization is to develop and promote relations between two countries through films, Television and Media. Help all those who want to get into film business, film and television training, film festivals, interaction programs and creating awareness and exchange about the culture of two countries.

Ugo Ben, L Oyeleela, Bimakinde Jide, Osei Tutu Safo, Busari Omogbocahan andBamigbola Olyfemi have been enrolled as members of the organization. The meeting was also conducting with Nigerian Writer Onyeka Nwelue who later was interviewed at Radio Noida 107.4FM on the release of his new book.