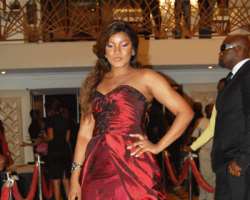 One fellow who came to greet Omotola on the red carpet of the movie premiere of Ije at Silverbird Galleria on Saturday 31 July 2010 was 'rubbished' as the actress gave her a scornful and degrading looks.We watched as the young man who wore white shirt and jean rushed to Omotola's side as she was about stepping off the red carpet,with so much confidence and ' i know her' smile, the young man stretched his hand to shake her hands with the star, but she looked at him and just walked away. Omosexy, as the star actress is fondly called came with a body guard, who also looked at the guy like a piece of wood.

"The guy was too forward but that's not enough reason for Omotola to mess him up like that. After all the young man appeared to be well dressed and also invited for the same movie premiere where Omotola co-starred" a guest told us.

Omotola appeared to have earned a prominent place in the 'Miss Snubbish' Nollywood profile list of actresses.

To those who know Omotola Jalade-Ekehinde, the Nigerian born star actress,nothing comes as a suprise.She always have her steps well scripted in her head, even when she is not before the camera.Even without saying a word, Omotola has shown with her attitude and her actions that she is a star.Something tells us that she has read so much about Hollywood stars and her dream is just to put them to practice it.