Stella To Work With Nollywood Stars 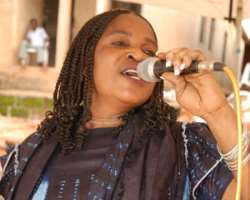 As the fourth edition of Stella Monye's monthly show tagged The Huk Up Show comes up on 6 August, the samba queen is set to party with Nollywood stars and human right groups.

P.M. Entertainment learnt that she has invited top actors and actresses including Ejike Asiegbu, Joke Silva, Olu Jacobs, Eucharia Anunobi and others, to be part of the show, which will hold at the Prestige Hotel near New Afrika Shrine, Agidingbi, Ikeja, Lagos.

The Samba queen, who now attends a highbrow gym in GRA, Ikeja, said the purpose of the exercise is to keep fit and to be able to perform very well as Huk Up Show, according to her, is about surprises and this one will not be an exception.

While congratulating Nigeria's U-20 female football team, the Falconets, for their performance in the ongoing World Cup tournament, Stella regretted not joining the team at the formative stage when she was approached by the Nigerian Football Federation