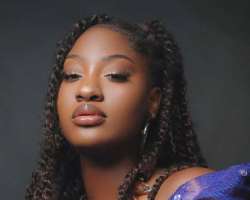 A young lady who shares stark facial semblance with Tems, Nigeria music star, has stirred confusion on social media when she queried whether she bears any resemblance with popular singer, Tems, as others have been telling her so.

The lady identified on Twitter as Princess Adaeze took to the micro blogging platform to put the question to her followers.

According to Adaeze, although she doesn’t see the resemblance, many people have been commenting that she bears an uncanny resemblance with the songstress.

“Everyone keep saying I look like tems but am the only one that is not seeing it 😔,” she wrote as she shared photos of herself so netizens can make comparisons.