Carter: Machala, "I Own The Song, I Only Reached Out To Him Because I can't Sing" 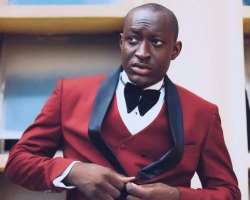 Fast-rising skit maker turn singer Carter Efe has in his interview vehemently claimed ownership of the popular song, Machala. The song, Machala is a tribute to Wizkid, a music legend.

He debunked the claim that Berri Tiga own the song, Machala. The story that he is the owner of the song Machala and that they sang together was revealed by Carter during a recent interview with Ebuka on Rubbin Minds.

In the interview, Carter narrated how he came about the hit jam. He described that the source of inspiration for the song came when he was playing with some YouTube beats. He noted that it was at first a freestyle, and that he summoned his friend, Berri Taga who knows how to sing to record the song with him.

Carter narrated as matter of fact that he never met with Wizkid before he recorded the song, but his decision to sing the song was primarily his love for Wizkid.

While doing this freestyle, Efe said he noticed that the song and tune he was playing were quite catchy, and the Machala vocals made sense. So he decided to reach out to Berri Tiga, asking him to come over to his place so they could record the song.