Shatta Wale, Ja Rule perform together on same in U.S 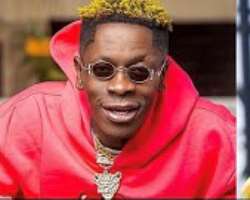 Ghanaian dancehall star, Shatta Wale is topping the game in his music career as he performes on same stage with American hiphop rapper, Ja Rule, at the world-famous Prudential Center in the US.

The event was organized to celebrate the victory of the Mayor of Newark, New Jersey, at the U.S.A.’s primary elections.

But before Shatta and Ja Rule performed on stage, they met and exchanged pleasantries. From a video that surfaced on social media, it appeared Shatta had introduced himself to the rapper and they were both happy to see each other. They hugged and had a chit chat. However, it’s not clear the exact place the two met before their performance.

He also performed with Jupitar and a host of other major artists and DJs.

The “On God” crooner had the large crowd on their feet at the party. Shatta is currently working to complete his Gift of God (GOG) album which may have some international collaborations