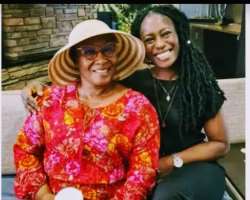 Mama G originally named Patience Ozokwo is having the time of her life. The popular Nollywood actress turn evangelist stated clearly in a post that it is the first holiday that she has had with her daughter in more than ten years .

Sharing the lovable photos with her daughter writes;

“First holiday together in more than 10 years.

Should I share a video of the beautiful memories?
More goodies coming up soon. "
Mama G as she is popularly called has mothered virtually every star actor and actress in Nollywood. She always made a joke saying the only two persons she is yet to be a mother to were Ichie Pete Edochie and Olu Jacobs. This recent post has about 24 thousand likes from her 1million followers. Mama G has been celebrated as one of Nigeria's icon of entertainment as well as a recipient off awards to her credit