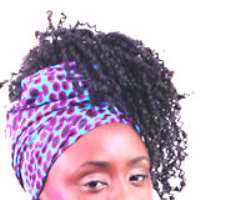 Janelia McNaire Sanya opens up to TADE MAKINDE at the Murtala Mohammed Airport in Lagos on her way to the United States after her appearance at the Havana Carnival.

As you leave tonight, what memory of Nigeria will you take back to US?
The fun and excitement. I also noticed that Lagos has changed, especially the traffic along Oshodi. I also saw the new roads that have been opened up in Ibadan. I guess I'll have to live with the pain that I wasn't able to visit a buka to eat Iyan and Amala. I surely won't miss it the next time.

You plan to come back?
Yes of course. I often come home to release my albums or just pay family visits. This is about my sixth home-coming in three years.

Has your visit to the country been worth it?
Of course it has. To be part of a resurrection was thrilling. I used to hear about Havana in my secondary school days, though I never imagined I would perform in an edition, especially since I had left Nigeria for US.

So, Havana was enough to bring you back?
Any musical event will bring me home. It took me less than three weeks to prepare myself to the trip. It just happened that the carnival was the first real show I'd be invited to perform in since I started singing. To me, it was a home-coming of sort. Whether it is Havana or any other show, I will always come because it shows one is thought of. The only way to show appreciation is by coming for such events. I don't rate events, I am a performer and will always come when called. I won't look down on any show coming from Nigeria, never.

Is it true you performed for Obama?
Yes and no. Yes, I performed at one of the several inauguration gigs that held all over US for him. No, I didn't perform before him in the White House.

Where did yours hold?
The one that held in Nigeria Embassy in Washington DC. It was a special moment for me because Obama sent Fauntroy, late Martin Luther King's activist friend, to represent him. Obama has a lot of Nigerian friends and he respects us a lot for our successes in many fields.

Highpoints of the gig
When Fauntroy told me Obama liked “Am An African” and that he was sent by the President to represent him at the inauguration gig.

Is it true that Obama asked you to perform it?
He didn't talk to me directly like I said, but one of his aide, who came with Fauntroy, told me he liked the song. One thing about Obama is that he always has a representative at major events who feeds him back. He is well organised. Even before he became president, he always had information. He knows what is happening everywhere.

Do you know if he has the CD?
I wouldn't know that, but I know for sure that he has heard the song. I also know that he has visited my site. Obama is into me, my song I mean, but I want to hear him say it. That's why I'm hope he'll invite me to the Rose Garden in White House.

You sound desperate. Are you not worried Michelle will see you as one?
She's black and she's an American. She's also a mother. I'm very sure she won't read meanings to it because I won't be the first Afro-American woman that will have met with her husband. I also won't be the last. She receives male visitors too and Obama surely doesn't have sleepless nights over that. I am an artiste who is lucky to have the most powerful man on earth love her song. The icing would be the meeting. He won't be in the White House forever, this will be a life time opportunity.

What if he won't meet you?
He has the right not to. It is me that's eager to meet him, that's all.

What was the inspiration behind “Am An Africa?”
United States has the largest concentration of races in the world despite being a white man's land. All races there are trying to make their marks. Africans, who were sold into slavery there, unlike others who came on their own, are not left out. Afro Americans are hard working and friendly. Our forefathers built America with their hands and sweat, yet we are not accorded enough respect. But this thing in us, the will to survive and succeed, stands us out. Be it in sports, music, medicine, engineering, humanities, Africans are well represented. Though we are not expected to be proud, we should be. It's sad that the word African is now used in a derogatory manner, but I'm out to say we should be proud to be Africans. To be black. I am proud to be half Nigerian, half American. I am experiencing both worlds. My message is that we should accept who we are, be tolerant and promote peace. They see us as blacks over there, we should accept that because we are. I am an African, though born in the United States. Obama is the grand-son of a male African immigrant, I am the daughter of a female African immigrant. That line was the one that got to him in the song.

It's been almost two years you released the CD. How is it still doing in the market?
It's selling hot, especially on i-tunes. The good thing about it is that I'm seen as an individual artiste and my word is my strength. If I impress one, he or she tells 10. If it goes on in that geometrical dimension, it will be a matter of time that you become accepted. That's what happens with my albums. The sales increase with word of mouth. It's only a matter of time that I will join the league of the Badus, Adus etc.

Plans on next album
Oh, I'm working on it. This one, though, will be narrowed to Nigerians and Nigeria. I want to try as much as possible to do it like my colleagues back home. I want that Nigerianess in it. I respect Nigerian musicians, they have this flavour to songs that stands out brand of music out. When you hear reggae songs, you will know straight away that it's Jamaican. That's why it has a global appeal. I plan to pay homage to Nigerian musicians and our people generally. Nobody knew hip hop would be this big when it started in New York about two decades ago. The same will be said of Nigerian songs in few years. We use our music to showcase our craft. That is very good.

What did it cost to bring you home?
I won't talk about that. All I know is that I was approached by an event planner and I immediately agreed to come to Nigeria, even before discussing financial terms.

What would you say you lost coming?
Some dollars of course. I stopped all shows that I should have performed in because it was an opportunity for me to perform before Nigerians.

Did you have time to shop around?
That's another thing I missed, but there will be another time. I couldn't even buy much for my kids in US. When I landed Nigeria, it was straight to the hotel to sleep, and then rehearsals. It's been fun this time.