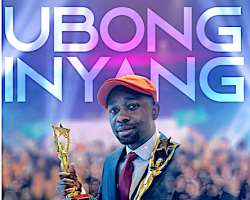 It was a moment of celebration and dual victory, as Ubong Inyang of the Ubong Inyang Production USA, an independent movie producer based in Bloomfield, Connecticut, won the prestigious awards at the 2021 IndieFEST FIlm Awards, California USA.

The 2021 edition of the international award, saw Inyang emerging victorious and winning the double trophy as "Best Trailer" and "Best African American Actor in a Movie" with his romance movie, Sunita; alongside other winners in different categories.

Speaking about the award, the Chair of the IndieFEST FIlm Awards, Rick Prickett disclosed that it was not easy to win the IndieFEST Award, owing to its highly competitive nature, as a global award. Further, he said, "The IndieFEST Film Awards are unique in the industry. Attracting both powerhouse industry veterans as well as talented new filmmakers it is an exceptional, truly international awards competition, not a traditional film festival – which allows filmmakers from around the world to enter their films in this prestigious competition. The IndieFEST is about helping industry professionals who create fresh, standout entertainment achieve the publicity and credibility they deserve. Serving filmmakers is the IndieFEST’s primary goal."

"The IndieFEST helps to set the standard for craft and creativity. The entries are judged by highly qualified professionals in the film and television industry. The judges were pleased with the exceptionally high quality of entries," he added.

Speaking with newsmen, Inyang registered his heartfelt joy for the victory, and described it as a source of encouragement and challenge to do more; even as he pledged to continue waxing stronger, doing better and diving deeper in the movie industry.

On what inspired his film that won the awards, he said, "The aim of this true-life story, Sunita, is to remind our people that the world is a global village and that we all should stick together, without letting tradition, hatred, etc to stand in between us. Love conquers all things.

He said, "This is a very joyous moment for us as it's an encouragement and assurance that the beautiful works we are doing at Ubong Inyang Production are being appreciated. We hope to continue to do more.

"In a special way, we want to thank all the cast and crew and everyone else that was part of this project in one way or another. We dedicate this award to you all. You are the real MVP and we appreciate all your efforts and commitments to this project. "Receiving this award won't make us relax, instead, it will push us to put more efforts into our subsequent projects. We must continue to tell beautiful stories that would make great and positive impacts on all that sees them. Thank you once again, and congratulations to us."

Sunita is a romance feature film that tells the true-life story of how an Indian princess fell in love with an African man hoping to make it forever bond but the King and the Queen rejected the union, and instead, proposed and made arrangements for her to marry an Indian prince.

The movie features such great movie personalities as Madu Iyer (former Miss Indian International), Yogita Mihiaria (a Global Icon Award winner - Best Actress), and many other superstars from the Connecticut state. The film is still under post-production and will be released sooner in this 2021.

Inyang relocated to United States in 2011 to become an actor/producer/screen writer/director. He has been featured in many films like Merry Christmas, Birthday gift, Sunita, Soulmate, The Devil Made Me Do It, A Trip to Africa, Curse of the River etc.