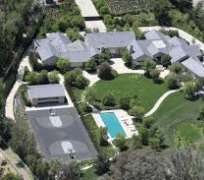 A source exclusively revealed to E! News that the husband and wife have been living separately for months and that “Kim knows the marriage is over.” However despite this, she has yet to officially file for divorce as “she wants to make sure she’s making the right decision for the kids.” Kanye has also not filed for divorce.

That being said, fans can’t help but wonder that if this billionaire couple (fun fact: Kim became the richest Kardashian in 2020 ) does in fact split, how will their child custody agreement work? Also, how would they divvy up their many extravagant assets?

Already drama is expected to transpire over Kim and Kanye's current family home in Calabasas, California . A source close to the couple tells Page Six that “Kim is trying to get Kanye to turn over the Calabasas house to her because that's where the kids are based and growing up. That is their home.”

The source continues: “She owns all the land and adjoining lots around the house but Kanye owns the actual house. They've both put a lot of money into renovating it.”

After purchasing the home in 2013, the couple worked with Belgian designer Axel Vervoordt to revamp its interiors. Last year, they unveiled the finished project on the cover of Architectural Digest and invited the outlet inside for a video interview . As you may recall, this minimalist estate, which features a neutral, mostly white palette, as well as a small number of simple furnishings, was greeted with mixed reactions from fans.

Regardless, both Kim and Kanye have a strong attachment to the property—it is the couple's main home. Unfortunately, this is just one of many big-ticket items they’ll have to deliberate.