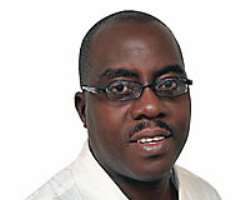 Taiwo Omotunde, a veteran musician in Nigeria, dumped banking for music many years ago, and has since then, done nothing but music. In this interview with AYO IDOWU, he speaks on his travails as a Nigerian musician. Excerpt.

Has music really worth the while for you?
Yes, but in this part of the world, the economy is not good. Though, generally or relatively, it has been good, as long as we can pay our bills and live a comfortable life. It's been good. You know that turning a natural talent into a commercial venture is not an easy thing.

Many years ago, you decided to quit banking for music, what was the conviction behind that decision?
I can't explain that. The decision was beyond my comprehension, I want to say it was divine, I was actually led. I can't credit myself with the decision, because I was not fully in control of myself when I made the decision, though, it turned out good now, if it was the other way, I wonder what I would be saying now. My decision was really beyond conviction.

How long have you been in music professionally?
I started in 1988, I started with Tatoo Divine Beats and in 1992, I started my own band. Though, I was still serving as a banker during this period, I started full-time music in September 1993.

Considering the thousands of musicians in the country, how have you been able to bring your music to the fore, for people to accept?
My education helped me, my experience in the bank helped me as well. Bank is a place where you can have one of the best corporate practices. I had the advantage of using my skills in management, to make profit in music. Moreover, infusing my education, I try to produce good and reasonable music to the people and not a bunch of junk. Another thing that helped me was consistency, good packaging and branding is another major factor. We have invested heavily in equipment and personnel, thus, we can now reach every nook and cranny of the country, with our music, not lacking a thing.

What can you say about the general acceptance of your music?
It's not been bad, considering the frequency of the live performance. I cannot use the sales of CDs as a criterion to answering your questions, because marketing and distribution is not in any good shape in the industry today.

Is there any reason why you should regret quitting banking?
No. No regrets.

Was there a time you almost regretted?
Yes, there were times I felt like asking myself if I made the right decision, but the commitment I had then, is still in me. The commitment was 'it is either music or music.'

Is there any part of music you are leveraging on, aside singing?
Music is about singing, but because I got into music as an experienced and learned man, I'm leveraging on my education, my style and taste. When I play my music, it appeases to like minds. I have gone a long way, to make the band an elite band. I can play in all dialects in Nigeria. I play jazz when the environment warrants it, I play juju a lot of the time, I play rock when it is warranted, really, I am leveraging on my education.

Do you want to call your kind of music an all-encompassing?
Yes, but when it comes to this part of the country, we base our music on juju. Though, I have rock, jazz and the likes in my collections.

How many albums have you released since you started?
I have released nine albums and one video since I started.

What can you say about marketing in the music industry?
I must confess to you, it's a problem. If you ask me what problem I have today, it is marketing. If I work so hard on my album, and it cannot reach the nearest place to me, then, there is a big problem with marketing. I need someone who can do this effectively. I can't be perfect in every department. In those days, promoters would find artiste themselves and bring them into limelight, but now, we have been condemned to doing it ourselves. People want my album in different parts of the country, but they don't know how to get it. They call all the time, but we have not been able to solve this problem.

Have you sought a renowned marketer to do this?
Well, the problem I have here is that I can't adhere to the unfair treatment the marketers give to artistes, they play artiste around, even for a year or more, before attending to them at all. I will not do that to someone who cannot stand my status, or who is just a little better than me in status, not because I am proud but I have my own self-esteem.

Are you saying you have personnel problems?
Yes, in the area of marketing.

What other things do you do aside music?
Nothing, not in the last 15 years. They are all distractions to me.

What do we expect from you in the nearest future?
By God's grace, we will release two albums before December, precisely, around September. one will be the general album and the other will be for Christmas. Our people should also expect a rebranded band now; expect a better and reformed music. We have invested a lot on equipment, mobilisation and manpower and thus, henceforth, we are coming out to give the best to the public.

Can you take us through your background?
My full name is Taiwo Omotunde, I was born on Ekiti State, into the family of seven, I was the second to the last of five children, until I lost my twin brother in 1989, I lived a good life until I was 13, when my father died. I went to good schools and ended at The Polytechnic, Ibadan, where I had my Higher National Diploma, and now, I am married with children.

What is your advice for someone who wants to quit his current profession, for what he knows how to do best, like you did years back?
Well, it is the best, but it's a matter of getting a leading from God. It might start rough, but if you know what you are doing, you will overcome. The truth is that an employee cannot be richer than his employer, so, if you are convinced of your dreams and they are genuine, it is the best.