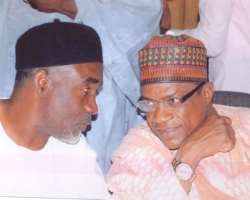 
ABUJA, July 01, (THEWILL) – Nigeria’s Northern Governors failed to reach a consensus on whether the group of 19 northern governors should support the jettisoning of the power sharing arrangement between northern and southern Nigeria at a meeting in Government House Kaduna on Thursday.

The Northern Elders’ Political Forum led by the former Inspector General of Police, Alhaji M.D Yusuf, and another group led by Senator Isaiah Balat and Chief Solomon Lar argued for and against abandoning the zoning formula.

The groups addressed the governors at different sessions during the meeting.

At the end of the meeting, the northern governors were polarized and undecided on a common front after both groups had concluded their arguments.

THEWILL gathered they would reconvene on July 22, 2010 to deliberate further on the issue.

Addressing reporters at the end of the meeting, the Northern Elders’ Political Forum spokesman, Dr. Iyorchia Ayu said the PDP should abide by the zoning arrangement and advised Jonathan to wait till 2015 for the southern slot to foster national unity and development of Nigerian politics.

Ayu said it would be unfair to short-change the north because of the sudden demise of President Umaru Yar’Adua.

"The governors of the 19 northern states are our governors and they are meeting here to discuss issues that affect the development of the North as a whole and we are here as members of the political elders’ delegation led by Alhaji M.D. Yusuf.

"We are here to talk to our governors on the future political development of the North and the issue of the presidency in particular and we have come to intimate them on the reasons and arguments on why we think the presidency of the country for the next four years should still remain in the North.

"Our arguments are simple and we have made them clear when we met in Abuja a few weeks ago. It is only fair that after President Olusegun Obasanjo’s presidency which was facilitated by the North for eight years, the northern part of the country should not be cheated just because our son, Umaru Musa Yar’Adua died.

"We believe that the North should produce the next president after which it will then go back to the South. It is for the unity and stability of this country and if that is truncated, it will affect zoning arrangement in the states where zoning also take place.

"But if at the end of the day, our wish is not taken, it is a democracy and we cannot compel anybody and we made it clear to the governors that this is our position. It is position for unity and stability of this nation."

Also speaking with reporters, Chief Solomon Lar said his group had a healthy and fruitful discussion with the governors. "We came to discuss issues that are going on in Nigeria and we are trying to find a solution to the problems that are trying to crop up in the polity and we have discussed and had a wonderful and fruitful discussion with the governors.

"We believe that a solution to the problem will soon be found and Nigeria will take its rightful place among the countries of the world."

Chairman of the Northern Governors Forum and Niger State Governor, Dr. Babangida Muazu Aliyu, in his address at the meeting said the political events that the nation had to deal with during the illness of late president Yar’Adua had been unprecedented in the nation’s history adding that work needs to be done to ensure the stability of the country.

"There has never been a better time that requires our highest sense of patriotism, nationalism and statesmanship than now, when we have found ourselves at the crossroad.

"We have seen worse situations and by Allah’s grace, we have overcome them. So, whatever it is, nobody should feel frightened or threatened because with Allah’s grace again, we shall overcome whatever challenges we face.

"But knowing all of us… we will be able to take firm decisions and stand by them. We must all assist in one way or the other in finding lasting solutions to the challenges that the nation is facing today. We must be sincere, frank and God fearing in whatever we do or in the position we may take in the overall interest of the nation."

The governors issued a communiqué at the end of their meeting. In the communiqué read by Governor Aliyu, the Governors said they agreed to return to their states to consult with their constituencies on the issue.

The communiqué: "We looked at one very important issue that has become a national concern and we noted that zoning was conceptualized with the best interest of Nigeria at heart whereby the presidential candidate for the presidency will move North/South and we know that is an excellent way to resolve many problems and ensure the unity and progress of our people.

"We note that this issue has been generating a lot of problems and many people have been discussing it. We encourage this discussion to continue so that an amicable solution can be arrived at. However, beyond zoning, we know the importance of producing competent and performing leadership for the country.

"The forum had the opportunity to listen to various groups of elders and we looked at all their concern and these are the issues that have been bordering us and we advised them to dialogue among themselves so that we can get a consensus as to the actual position on the matter.

"We also said that we will go back to our various states and meet with stakeholders so that we resolve this matter once and for all. We have given ourselves a deadline but that is not for public consumption at the moment.

"All discussions should continue at the various levels, but we do believe that this is an issue we can surmount without any difficulty. So, people should not be apprehensive. We resolved to provide that leadership as we have been doing and we will do it in consultation with all the stakeholders".

Some northern governors like Bauchi State Governor and Late President Yar’Adua’s son-in-law, Isa Yuguda have openly declared to support President Jonathan when he decides to contest.

Jonathan has said he would make his decision public very close to the PDP primaries.