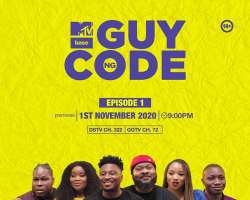 A new season of MTV Base Guy Code premieres this Sunday, November 1 and some of your faves will be sharing their take on sex and relationship topics. To get you excited, here are some of the things you should look out for.

Controversial Takes: The new season of Guy Code will feature all the hottest and coolest guys on the entertainment scene today, from Elozonam and Uti, to Sir Daudu and Buju and several other guys. These guys will share what the “guy code” is on some of the trending topics involving relationships and sex. You can be sure that there will be some controversial takes that will make your jaw drop.

Humour: With a combination of actors, artistes, veejays and deejays, influencers, there will be a boatload of humour and funny takes to go around. The guys are going to get you cracking up one way or another. Guys Code is going to be a lot of fun, that’s guaranteed.

Eye Candies: Have I already mentioned some of the guys that will be featured this season? Ladies can get their fill of these eye candies as they share their thoughts on certain hot topics. Guys Code is going to be an eye feast that you can’t get enough of.

Takeaways: In the middle of all the yarnings and goofing around, the guys and their female guests will certainly drop some gems that will be applicable in real life. They will also be sharing useful tips and insight, into the way each gender thinks and handles certain situations.

Watch the premier on Sunday November 1, on MTV Base, DSTV Channel 322, and GOtv Channel 72.