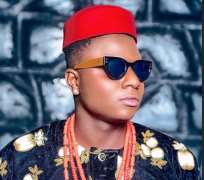 One of the rising Stand up Comedians, Philemon Nnadi popularly known as Yellowmouth has described Nigerian fast rising artiste, 'King Steve Benjamin' as one of the greatest discoveries in the world music industry.

Yellowmouth dropped this hint while rapping Imo young-up-coming artistes on the need to stay to be focused and humble if they wish to go far in the industry.

Using Moscow-based Nigerian fast rising singer, King Steve Benjamin, currently dubbed “King of Afro-Pop in Russia,” as a role model, he said the artiste is what he is today because he is focused, down-to-earth and have self respect.

He therefore called on the youths to live above delinquencies and embrace hard work, determination and desist from deviant begaviours.

"King Steve Benjamin" is billed to put pen on paper for a new handsome contract that promises global acclaim, The Nation also gathered on Saturday.

"He is Computer Engineering student in Moscow, who described his music style as Afro-Pop, said the contract is poised to take his career “to higher level.”

" He has to his credit back-to-back hit songs, among which are Konto and Ifeoma with other thrilling tracks.

“ He is of Ekiti State but a Nigerian to the core. His love for music and singing began very early in life.”