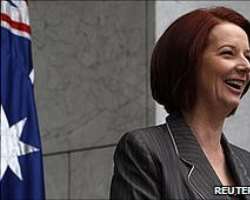 The Australian Prime Minister, Julia Gillard, has announced a new cabinet which focuses on stability.

Foreign Minister Stephen Smith also keeps his job but takes on the trade portfolio as well.

Former Prime Minister Kevin Rudd was not made a minister but Ms Gillard said he could be if her Labor party wins the next elections.

The two posts are central to the challenging issue of a proposed 40% tax on mining, something seen as contributing to Mr Rudd's sudden downfall last week.

“The premium that I have put in these new ministerial arrangements is on stability,” Ms Gillard told reporters.

“If the government is re-elected, I will be very delighted to welcome Kevin Rudd into the cabinet in a senior position,” she said.

Surveys taken since Ms Gillard took the prime ministership last week show a jump in popularity for the Labor party, which could call an election any time from next month.