American Rapper Future Strips For The Ladies at #FutureLiveinLagos Concert 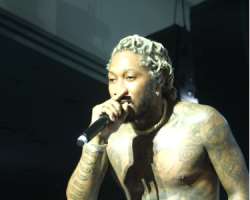 For the crowd and especially for the females at Future Live in Lagos concert, which held at Eko Convention Centre, Victoria Island, Lagos on Sunday, December 29, 2019, it was eye candy galore as American Rapper Future raised the roof with a raunchy, energetic performance.

For his second stage entrance at the event organised by TEC, Future decided to give the ladies a treat by storming the stage shirtless. At this point, female fans couldn’t stop screaming and eagerly pushed forward to catch a glimpse of his well-toned body. Quickly, he got down to business and performed hits such as ‘March Madness’, ‘Mask off’, ‘I Got The Keys’, ‘Incredible’, ‘Turn on the Lights’, and ‘My Savages’.

Unable to contain their excitement, the fans screamed their lungs out, waved their hands and swayed their bodies at the sight of Future. They were seemingly incredibly excited to have him in Nigeria and most importantly, shirtless on stage.

See photos of Future making the ladies happy below: