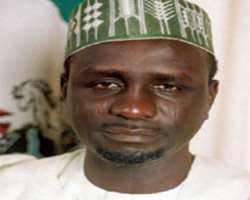 KANO, June 17, (THEWILL) - Kano State executive council approved N1.2 billion as mobilization fee for the rehabilitation of Magaga project to take off which is to be executed by a Malaysian firm.

The state Commissioner for Environment, Garba Yusuf Abubakar revealed this while briefing newsmen on the outcome of the state executive council meeting held at the government house in Kano Thursday.

Garba Yusuf Abubakar also announced that the council assented to release about N572.2 million for the purchase of fertilizer for the 2010 wet season farming. The state government sells each bag of fertilizer at a subsidized rate of N1000 per bag.

Speaking further, he asserted that the council approved about N3 billion for the construction of 11 roads in Madobi, Ungoggo, Dawakin Kudu, Kibiya, Shanono, Rano and Gabasawa. Also approved is the release of N18.3 million for a flood and erosion control project at Sharada by Nana Petroleum in Kano municipality.

On Hajj, 2010, Garba Yusuf announced that N504 million was approved by the council as rent subsidy for the state 7,000 pilgrims in view of the competitive cost and demand of accommodation in Saudi Arabia.

The Commissioner stated that the council consented to finance the purchase and installation of medical gas pipeline for the on – going multi billion Naira Giginyu Hospital at the cost of N133.6 million. He added that N16.1 million would also be released for the purchase of anti retroviral drugs for some hospitals in the state.

In the sector of education, Garba Yusuf disclosed that N262.6 million was earmarked by the council for scholarships for recently interviewed students of the state attending tertiary institutions in the country.

Meanwhile, the state government has agreed to make available N50.8 million to the state Ministry for Local Government to relocate to Audu Bako Secretariat as its former office complex at Kofar Nassarawa is to be demolished to give way for the construction of a five star hotel.