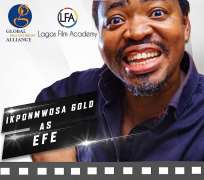 MTV Shuga and the Johnsons star Olumide Oworu is starring as the lead character in the upcoming short film ‘Choices’, the third ‘Film for Life Project’ of the Lagos Film Academy (LFA), in association with the Global Philanthropy Alliance (GPA).

It will be recalled that LFA selected three young aspiring filmmakers, who will have the opportunity to make a short film directed at impacting social change, themed in this edition, is a storyline around the upcoming 2019 general elections in Nigeria.

Baridakara Nwilene, the team producer who is from Rivers State, Alfa Faruk Umar, the team writer from Nassarawa State, and Joshua Tostso, the team director from Delta State; have now made their short film, titled ‘Choices’, and it is set to premiere globally and digitally on all forms of online media.

Election year in Nigeria is basically characterized by fear, uncertainty and an increase in level of crime rates. As a result of this a lot of citizens become complacent and uninterested in participating in the electoral processes thereby refusing to use the one weapon they have to effect the change that the country needs to experience which is their votes.

Choices tells the story of Tega, the only son of a family whose father Efe has over the years been a political thug and a mercenary who disrupts electoral processes. Every election has been an opportunity for him to make money and help his family survive. This year, Tega faces a critical choice that could change not just him and his family, but the entire community.

Choices will be premiered globally across a plethora of digital platforms at 12:00 (GMT) tomorrow, Saturday, 26th January 2019.

Founder of LFA Chris Ihidero has noted, “It is also important for us to make an impact with the short film that will be made, with the grant gotten from Global Philanthropy Alliance. The upcoming election is a major social happening in Nigeria, hence the need to play our parts with the story that will be told.

Jamie Passon Brooks, the Executive Director, Global Philanthropy Alliance (GPA), has said that the film is “brilliant and impactful. The message is clear, and the photography is beautiful”. She also notes that “GPA is proud to support young, talented Africans as they pursue their dream and in doing so, strive to create a peaceful society.”

LFA is a leading non-profit organization centred around support for young creatives who want to acquire life-long skills and techniques as creatives across the continent, using initiatives like the ‘Film for Life Project’.

Global Philanthropy Alliance (GPA) develops young social entrepreneurs in Africa by funding youth-led or youth-engaged organization that unleash the power of youth to advance the economic and social health of their families and communities.