All The Thrills At The Maiden Editon Of Superfest 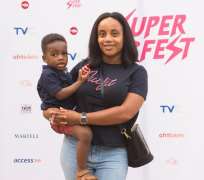 On Saturday, December 23rd, 2018, fans and supporters of hip hop maverick Naeto C were treated to a day of fun and entertainment in celebration of the artiste’s 10-year anniversary.

The maiden edition of the ’Superfest’, hosted by Shody, had a number of performances from upcoming artistes, and an abundance of food and drinks. Notable players in the industry such as Dr Sid, Ice Prince , Falz, Teni, Bizzle, Asa Asika , Ehiz, Osi Suave, Ikechukwu, Douglas, and Uzi also came out in support of Naeto C.

Naeto C hopes to use the Superfest as a platform to promote young talent in the industry, and provide them the opportunity to become as success as he has been. We’re excited to see more of what the artiste has planned with this initiative.