THE RETURN OF THE BUSIA COMPLEX 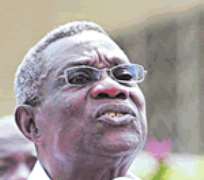 
Why are Nigerians and Nigerian businesses targeted for harsh treatments and special laws in a brotherly place like Ghana? Is Ghana's protectionism borne out of enlightened self-interest or the fear that Nigeria may pollute their land with our aggressive and questionable ways? Or is it just a case of an ungrateful neighbour biting the fingers that fed them in their days of travails? And, what should be Nigeria's response, if any, to the provocative measures Ghana seems to be stacking against Nigerians in Ghana? These and more agitated the mind of readers who responded to last week's article, Ghana: The Return of Busia Complex. Below are some of the responses:

Blame the Black Man's complex
That was a fine piece as usual. It is quite unfortunate that our brothers in Ghana are treating us this way but it is not unexpected because the Blackman is usually the Blackman's worst enemy. From my experiences in this Africa and in the USA, the black man would rather treat a white man more respectfully than he would his own kind. Let me share this experience I had in Harare. Some years back, I happened to spend a night in one of those high profile hotels in Harare. In the morning when the black maid came in to tidy up the room, she sounded so polite initially but as soon as she realised that I was a black man, she changed and became rather rude, looked at me with scorn and sighed. I could not understand such change of attitude at first. But, I later realised that she never expected me, a black man to lodge in such a hotel. That is how we treat ourselves.

I know you have been to USA, don't you see the way the Afro-Americans relate with you? They see you as a threat and would hurt you verbally or physically at the slightest opportunity. What I am trying to say is that we don't even respect or appreciate our self no matter how good we are. Most of the time we are not accepted by our brothers not because we are bad but because we are who we are. I think it is a mental conditioning borne out of a feeling of complex and lingering colonial mentality which will take a long time to go away.

In addition, our media, including Nollywood, emphasizes the negative aspects of us which portrays us in very bad light. How then do you expect others to respect you? Even our governments would rather give jobs to a white man including jobs like a national football coach. ( Imagine the world's largest black nation going to the world cup with a white coach). Culturally, anything good is attributed to the white man and anything bad or evil is attributed to the black man. All these points indicate that the Ghanaians are only behaving true to type.

Another issue I would like you to treat in your column is the influx of Nigerian children into Ghanaian schools. We are cheapening and ridiculing ourselves. If I had my way, the Nigerian graduates of Ghana should go back to work in Ghana with those certificates. That may sound silly but note that Ghana does not even honour our certificate so why should we honour theirs? Let me stop here until I hear your comments on this issue. Fire on brother I love your incisive write ups

Stanley Usoro,
We Need Deep Introspection
Mr. Igwe, armed with indisputable facts and figures, your article on The Return of Busia Complex, is simply a powerful one. I believe that Ghana is neither a friend nor foe, but is just being selectively xenophobic, myopic and unimaginative in the way they go about the issue of their national interest. Unwittingly, foes are made when people pursue their national interests, unmindful of the interests of others.

Let us note as follows: A friend that comes to sabotage your national interest is worse than a foe who minds his business. And, a foe that helps to quench the fire in your house is better than a friend who is nonchalant over it. With a surfeit of problems, no sane person wants to add to his or her problems. People have reasons—justifiably or not—to mete out differential treatment to others. Where we come from have much to do with the kind of reception or treatment we get because places (like names) have things associated with them.

A crook from where the rule of law is observed who contemplates expanding his business empire is certain to be more welcome than a decent man from a lawless state. I don't think we have reasons to complain about the kind of treatment meted out to us everywhere. They cannot be wrong always and we cannot be right always. It calls for introspection. We cannot subject ourselves to inhuman treatment, capping it all with the 'normalization of impunity' and expect to get better treatment elsewhere.

In all reasonableness, we should not expect the person from where the rule of law is aberration and treated as a misapplied concept to get the same kind of treatment as the other person from where the rule of law is respected. Please, what kind of rule of law do we expect from a place where thieves of all categories easily become role models and strut about not arrested and prosecuted? As such, when some of our people contemplate expansion of their businesses to other countries, there is trepidation that they may in the process export and cultivate bad manners.

Patriotism in my humble opinion, is the height of emotional investment in the progress of a place in human affairs one is a coordinate stakeholder. It means that patriotism is possible within the context of egalitarianism in a system predicated on the principles of give and take. By that you are assured that your interest is protected (in life and in death) as you contribute your own quota to societal growth and development.

Progress is enough evidence that a place works; that the system is in progress. When the benefits of societal progress percolate down the line, the atmosphere becomes conducive for patriotism to evolve. It is neither coerced nor decreed into existence. Therefore, whatever militates against societal progress—and they are legion—hinders evolution of patriotism. It follows that for patriotism to evolve, the place or system must work for the good of all in the society.

Where societal wealth is steadily cornered by a handful of people hoping to prosper at the expense of the rest of the society who are—and made to remain—abjectly deprived, the result is societal stasis; and patriotism is impossible to nurture. This shows conclusively that patriotism cannot evolve in a condition of live and let die. Nor does it thrive in a regime of falsehood.

Finally, whoever thinks he is anything should measure himself against Christ our Lord. As change is constant feature of life and no condition is permanent, I find it difficult to gloat over anything. And for similar reason, the strong should not fret over the passing phase. However infinitesimal something may be, it still makes a reference point. Ghana is not too small to be neglected but comparatively too insignificant to worry about.