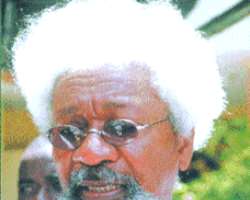 Soyinka
Yesterday marked 17 years since the memorable June 12 Presidential election regarded by both local and international observers as the freest and fairest in the history of Nigeria.

The then military junta led by the self-styled military President, Ibrahim Babangida, after putting the nation in suspense for 11 days, finally annulled the election and promulgated a decree to give the annulment legal teeth.

Babangida while signing the annulment decree was quoted as saying the step was taken to 'save our judiciary from being ridiculed and politicized locally and internationally.'

The annulment of the election led to widespread protest that forced Babangida to install an Interim National Government, led by Ernest Shonekan.

During the nationwide protest, several Nigerians took various positions during the eventual crisis. Who are they?

Late Lamidi Adedubu: the departed strongman of Ibadan politics was the man that packaged a conditional release for Abiola from the gulag.

The former Head of State, late Gen. Sani Abacha had put him in detention.

The condition was that Abiola was not to travel out of the country and also refrain from all press interviews. The politician however declined the offer of the conditional bail after advice from members of NADECO.

Late Abraham Adesanya was a very vocal member of the opposition against the annulment of the election. Along with several other Nigerians, he formed the NADECO to tackle the military junta. His influence was so massive that a failed attempt was made on his life.

Prof. Wole Soyinka: The Nobel laureate teamed up with democrats to demand an end to the government of Sani Abacha. Although he operated from overseas, his impact was a thorn in the flesh of the military. At the onset of the annulment, he had said, 'A very tiny but powerful cabal is toying with the future of our nation…Any further delay in making the people's verdict official is a deliberate cultivation of chaos.'

Comrade Frank Ovie-Kokori was then the secretary general of the National Union of Petroleum and Natural Gas workers (NUPEN. The union practically shut down Nigeria as the members refused to convey petrol to the various filling stations nationwide. The resultant economic effect was one of the things that forced Babangida to step aside.

Dr. Attahiru Jega was then the national chairman of the Academic Staff Union of Universities (ASUU). Operating through the ASUU, he shot down the nation's university system and faced the military junta frontally.

Sen. Arthur Nzeribe, the maverick Senator was the instrument used by some undemocratic elements to annul the election. Operating through the Association for Better Nigeria (ABN), he secured an injunction against the conduct of the election from Justice Bassey Ikpeme. The injunction was given despite the ouster clause in the decree governing the operations of the then electoral commission forbidding the powers of the court from stopping the election.

Late Kudirat Abiola is the second wife of the winner of election.

She was so daring in the agitation to reclaim the mandate of her husband that she was assassinated by goons of the late Gen. Sani Abacha in Oregun area of Lagos. Senator Rashidi Ladoja: The former governor of Oyo State teamed up with Nigerians of like minds to kick against the continued stay in office of the Abacha junta. Ladoja along with others operated from outside the country to make life torrid for the government.

Gen. Olusegun Obasanjo: Although the former president played no role in the crisis, his alleged comment in Zimbabwe that Abiola is not the messiah that Nigeria needs stuck on his garment. It was believed that his negative comment on the June 12 struggle to a large extent gave the military junta some confidence to hang on for a while.

Late Gani Fawehinmi: He was a very vocal voice in the opposition to the annulment of the election. Soon after the cancellation was made public, Gani was quoted as saying, 'The nation is in danger. It is abundantly clear that the military government is leading Nigeria into a political crisis of immeasurable, chaotic proportions.'

Late Beko Ransome-Kuti: The late Ransome-Kuti was also a thorn in the flesh of the military junta, particularly after the election was annulled. He was always at the head of every demonstration and protest. Late Adekunle Ajasin: The former governor of the old Ondo State was at the forefront of those out to reverse the annulment. Undeterred by the determination of the junta to silence dissention, he is always ready to issue fire-spitting statements that tended to make the junta unhappy.

Sen. Bola Tinubu: The former governor of Lagos State was a member of the National Assembly that was sacked by Abacha. He fled Nigeria and took sojourn in America from where he worked tirelessly against the government.

Late Chima Ubani was another thorn in the flesh of the junta with the manner he marshaled the civil society groups to confront the junta after the election cancellation. Olisa Agbakoba: The fiery lawyer was one of the leading voices against the cancellation of the polls and was one of those who suffered brutality in the hands of the Police.

Comrade Shehu Sani: He is another human rights activist that made life very hard for the junta. The Kaduna based activist, was responsible for the northern edge of the struggle to revalidate the annulled election. Tony Anenih: The retired police officer was the national chairman of Abiola's party, but the Edo born officer, strangely renounced the victory of his party in the heat that trailed the annulment.

Doyin Okupe: He was the spokesperson of the NRC, but after the annulment of the election, he decided to be nationalistic as he asked the junta to revalidate the election saying he saw no reason why the poll should be cancelled.

Lam Adesina was a former governor of Oyo state. He was also a leading figure in the agitation to revalidate the election in Ibadan. He was once arrested by soldiers and branded a 'prisoner of war'.

Abdul-Azeez Arisekola-Alao: The Islamic leader came into the bad books of pro-democratic activists who viewed his activities as inimical to their own aspiration. Several of his properties were torched during one of the protests in Ibadan. Prof. Humphrey Nwosu: He was the national chairman of the electoral commission credited to have conducted the historic election. Despite alleged pressures from some quarters on him not to conduct the election, he pressed ahead coming up with the novel Option A4 and was determined to make the election transparent until, some soldiers, said to be operating on the orders of the late Abacha bundled him out of his office moment before the election was stalled.

He went into oblivion only to come out recently to reveal that Abacha and the then Attorney General and Minister of Justice, Clement Akpamgbo, actually annulled the election. Ibrahim Babangida: He was at the head of the junta that annulled the election considered the freest and fairest in the political history of the country. He supervised one of the longest transition programmes in the country that saw his government decreeing two political parties for the civilians, built offices for the parties and funded them.