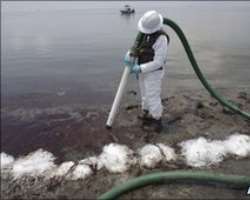 As many as 40,000 barrels (1.7 million gallons) of oil a day may have been gushing out from a blown-out Gulf of Mexico well, doubling many estimates.

The US Geological Survey says that flow rate could have been reached before a cap was put on the well on 3 June.

BP's chairman has been asked to meet Barack Obama next week, amid assurances from the UK and US that bilateral ties will not be affected by the crisis.

UK PM David Cameron and President Obama will discuss the spill at the weekend.

Oil has been leaking into the Gulf since the Deepwater Horizon rig exploded on 20 April and sank off the coast of the US state of Louisiana, killing 11 workers.

BP said the device placed on the well collected 15,800 barrels of oil on Wednesday – slightly up on the 15,010 barrels collected in the previous 24-hour period.

'Lack of integrity'
Late on Thursday, the Obama administration announced that the chairman of BP, Carl-Henric Svanberg, had been asked to meet Mr Obama and the officer in charge of the relief effort, Adm Thad Allen, at the White House.

The meeting will be held amid growing worry about whether BP would have enough cash to pay for the clean-up operation and compensation for those affected.

US Attorney General Eric Holder has warned that Washington would “not pay a dime” for cleaning up and that BP would be held responsible for all damages.

And the Speaker of the House of Representatives, Nancy Pelosi, accused BP of a “lack of integrity” over its approach to the spill.

That has raised concerns in the UK, where BP's dividends form a crucial part of pension funds for millions of Britons. The sharp criticism from the US has been described by some UK politicians as growing anti-British rhetoric.

On the markets BP's shares closed down 6% in London on Thursday, having earlier fallen as much as 12%.

'Mitigating effects'
Speaking on Thursday during a visit to Afghanistan, British Prime Minister David Cameron described the spill as “an environmental catastrophe”.

MARDELL'S AMERICA
Continue reading the main story
Mark Mardell,
BBC News, Washington
The fact that Mr Hayward is not American has probably made him all the more irritating to his US audience

Mark Mardell
BBC North America editor
Read Mark's thoughts in full
More commentators' views
“BP needs to do everything it can to deal with the situation, and the UK government stands ready to help,” he said.

“I completely understand the US government's frustration. The most important thing is to try to mitigate the effects and get to grips with the problem. It's something I will discuss with the American president when we next talk”

In Washington, US state department spokesman PJ Crowley said the spill was a matter between the US and BP, not the UK.

“BP is a private company and this is about the impact of a tragedy in terms of the explosion of the oil platform and the resulting oil spill,” he told reporters.

“This is not about relations between the United States and its closest ally.”

His administration has been steadily applying more pressure on the oil giant, with reports that the US justice department is considering legal action to ensure BP pays damages and compensation to those affected.

Testy though relations between the US government and BP have become, the oil spill has yet to mar the so-called “special relationship” between America and Britain, says the BBC's David Willis in Washington

'Pressing concern'
Also on Thursday, Mr Obama met relatives of the 11 workers killed in the explosion that sank the BP oil platform in April.

Mr Obama, who has himself come under mounting political pressure over his handling of the crisis, held the meeting at the White House.

One man whose son was among the dead said the president had told the families he would not forget about them. Keith Jones, a lawyer from Louisiana, described the meeting as a “very positive experience”.

Mr Jones said Mr Obama had played with his four-week-old grandson, whose father Gordon was an engineer on the oil rig.

Amid growing public anger in the US, Mr Obama is keen to show he is on top of the situation and will make a fourth visit to the region on Monday.

At relief headquarters, officials said an understanding on speeding up the payment of compensation claims had been reached at a meeting with senior BP executives.

Administration officials had raised a “pressing concern” about the time BP was taking to provide relief payments, particularly to businesses in the stricken area, one official said.