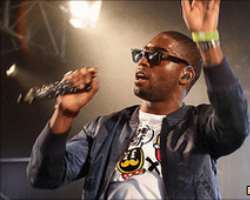 Rap star Diddy has said he believes British hip-hop is “on the verge of breaking” in the US charts.

The rapper, formerly known as P Diddy and Puff Daddy, has worked with UK acts Tinie Tempah, Chipmunk and Skepta.

“I've always been abreast and respected the UK hip-hop scene and I look forward to great things,” he told BBC News.

After enjoying unprecedented success at home over the past two years, some UK urban artists are beginning to make inroads in the US.

Jay Sean and Taio Cruz have both scored number one singles in the US in recent months – the first male UK urban artists to reach the top spot. Both were helped by guest spots from established US stars.

In the UK, nine number one singles have been by homegrown hip-hop acts since May 2009, most by artists that have emerged from the east London grime scene. Tinie Tempah is on course to score the tenth this Sunday.

Diddy has worked with Tinie Tempah, who is set for another number one hit

Diddy, who is currently promoting a new album and stars in the film Get Him To the Greek, said British MCs and producers had found their own voice.

“I think in the past maybe some of the UK hip-hop artists weren't as authentic to where they come from,” he said.

There is now a “self-pride in UK hip-hop”, he continued. “That's the starting point. Hip-hop respects something that's authentic.

“Just like the way in the US it took time for the south and the west coast to break, it's the same thing and I just think that UK hip-hop is on the verge of breaking.”

The rapper and music mogul plays a record label boss in Get Him To the Greek, which features comedian Russell Brand as wayward rock star Aldous Snow and is out in the UK on 25 June.