THE SAGA CONTINUES IN THE TRIAL OF ''ALABA KING OF PIRATES'' 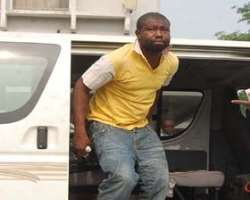 Last Wednesday, May 9, 2010, at the Federal High Court Annex, Ikoyi, Lagos, the trial continued in the most celebrated case of music piracy in the history of Nigeria. It was the trial of Mr. Tony Onwujekwe of No 2 Obakason Plaza, Alaba International Market, Lagos, now famously known as Alaba King of Pirates.

The court room of Hon. Justice Okon Abang, witnessed yet more legal drama as Senior Advocate of Nigeria and lead Defence Counsel, Chief Theodore Ezeobi played a game of hide and seek with the first prosecution witness, Mr. Mathew Oloruntade, a constable with the Ojo police station, Lagos. For close to two hours, Chief Ezeobi cross examined Constable Oloruntade. The obviously very experienced senior advocate took the police constable back and forth on the arrest on November 5, 2009 of the accused and the collection on November 6, 2009 of the 6 huge Ghana-must-go bags and 22 cartons of CDs, DVDs and VCDs which had been admitted as exhibits in the case. It was clear that the senior advocate was painstakingly trying to establish inconsistencies in the testimony of PW1. At a point, Chief Ezeobi faced the witness and said to him, 'you know that the complainant and the accused are in the same market but are not good friends, right? to which the witness replied,''I don't know''

There was further drama when the second prosecution witness, Mr. Augustine Emmanuel, a Police Inspector attached to the Lagos team of the Inspector-General of Police Special Monitoring Unit, took the stand. When lead prosecution counsel, Mr. Obi Ezeilo of the Nigerian Copyright Commission sought to tender what Inspector Emmanuel termed 'confession statements' allegedly made by the accused, there was dead silence in the court room as Chief Ezeobi took quite sometime conferring with his client. At a point, it appeared that the senior advocate had decided not to challenge the admission of the documents. Suddenly, he seemed to have changed his mind as he mounted a stern opposition to the admission of the documents saying that they were obtained under duress as the defendant had agreed to make the statements only to obtain a release from detention. Despite the best arguments of Chief Ezeobi, Justice Abang ruled that the documents were relevant to the case and ordered that they be admitted in evidence.

Under cross examination by Chief Ezeobi, Inspector Emmanuel told the court that the accused was never detained by his unit and that he was indeed treated as a petitioner since it was as result of the petition of the accused to the Inspector-General of Police, that the case was transferred from Panti CID to the IG Special monitoring unit. Thereafter, Justice Abang adjourned the case for continued trial on July 14 and 15, 2010.