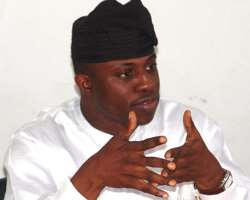 A group of lawmakers on Wednesday gave the Speaker of the House of Representatives, Mr. Dimeji Bankole, seven days to resign or be 'disgraced out of office.'

The ultimatum by the group known as Progressive-Minded Legislators heightens the tension that has gripped the House in the last one month.

The PML, at a news conference in Abuja, said it was ready to forward petitions to the Economic and Financial Crimes Commission; the Independent Corrupt Practices and Other-Related Offences Commission; the State Security Service; and the Peoples Democratic Party on alleged corrupt practices by Bankole.

'We have all the evidence with us and we are not joking. We are going to send petitions to the EFCC, the ICPC, the SSS and the headquarters of his party, the PDP,' the group's spokesman, Mr. Dino Melaye, said.

Melaye, a PDP lawmaker from Kogi State and former Chairman of the House Committee on Information, added,' We are prepared to defend the evidence we have to ensure that we restore the battered image of the House.'

He claimed, at the conference attended by eight other members of the PML at the National Assembly, that they had lost confidence in Bankole's leadership.

The PML members also alleged that the 'ineptitude' of the Bankole leadership had ridiculed the House before Nigerians and 'made members of the House a laughing stock.'

They added that the leadership under Bankole no longer had the credibility to command respect from members.

Apart from allegedly showing 'disrespect for members', the lawmakers said that the speaker' leadership style had caused 'disaffection, disunity and rift' between the Senate and the House since 2007.

'The speaker also frequently makes unsubstantiated public statements that tend to bring the image of the House to disrepute and pit the House with the Executive', they claimed.

Another member of the group, Mr. West Idahosa, who also spoke, called on the EFCC to release its report on the investigation into the N2.3bn car scam, which rocked the House in 2008, and prosecute members of the leadership who were allegedly indicted.

The Chairman of the EFCC had on Monday told journalists at a forum to mark her second year in office that the report on the car scandal would be forwarded to President Goodluck Jonathan for 'proper directive.'

Adamu, a lawmaker from Jigawa State, heads another group in the House known as the Nigeria First Forum.

The NFF had publicly identified itself with Jonathan and was instrumental to the decision of the House to proclaim him as acting president, weeks before the death of former President Umaru Yar'Adua.

Melaye is the Publicity Secretary of the NFF.
However, Daika later expressed dissatisfaction with the 'approach' adopted by the group. But, when asked whether he had backed out of the group, he replied, 'No comment.'

But, in a reaction, the Chairman of the House Committee on Media and Public Affairs, Mr. Eseme Eyiboh, accused members of the group of pursuing personal agenda in the 'guise of public interest.'

Eyiboh, in a statement, called on security agencies to investigate members of the group as they had earlier threatened to make the House ungovernable.

Part of the statement reads, 'The attention of the leadership of the House of Representatives has been drawn to the activities of some self- styled 'progressives' in the House who misled the perceptive public with their proverbial 'ostrich display' of selfish tendencies in the guise of public interest.

'Their activities could best be a swan song from an orchestra, but they are advised to avail themselves with the allowances of House rules and extant provisions of the relevant statues.

'The present leadership is a creature and creation of the generality of the House and the prevalent synergy culminating in the successful constitution review vindicates the acceptability of the leadership.

'Those 'progressives' should vacate their theatre or be absolved and come join other discernible members to complement the current legislative engagements for executive action.

'The call for the resignation of the House leadership is part of the orchestrated plot by these 'progressives' to make the House ungovernable as threatened by the arrowhead of the group.

However, the lawmakers denied that they were aggrieved members who had personal scores to settle with the leadership.

Melaye was forced to resign as chairman of the House Committtee on Information last July following his failure to substantiate similar allegations he made against the Chief Whip of the House, Mr. Emeka Ihedioha.

But Melaye dismissed any connection between the ultimatum given to Bankole and the personal grievances of some members of the group.

He maintained that the group was fighting to restore the image of the House.