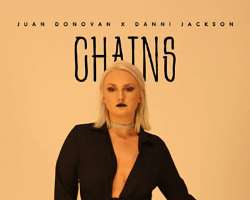 Danni Jackson is one of the UK's budding new stars. Not only did the songstress score a minor hit with her single "So Sick" in 2017, but she is also the co-star & co-creator of the award winning Comedy Central sketch comedy show Bad Snappers.

Producer Juan Donovan is also coming off of a productive year as his 2017 single "Night Shift" created a bit of a stir and landed on Spotify's coveted Discover Weekly playlist. Juan and Danni connect again (Juan produced 'So Sick') for Juan's new single called "Chains"

"Chains" is a mid-tempo pop song with strong R&B undertones that is the story of lost love which was written by Danni herself as she drew from a past experience. The song is guitar & percussion driven and bears a smooth warm texture and Danni's vocals fit perfectly over the track changing from monotone to high-pitched every few bars. This track has all the makings of a true pop hit and can surely be a musical breakout for both Juan and Danni.