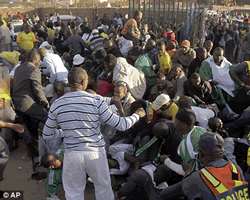 Chaos: Fans fall on one another prior to the match in Johannesburg

Fifteen persons were injured on Sunday in a stampede that marred Lars Lagerback's first victory as Nigeria's coach when the Super Eagles defeated North Korea 3-1 in their final warm-up match before their World Cup first match at Makhulong Stadium in Tembisa on Saturday.

Lagerback's first two matches since he was appointed Nigeria's coach ended in draws, 0-0 with Saudi Arabia and 1-1 with Colombia.

Sunday's victory was, however, marred by a stampede before the kick-off of the match in which more than a dozen persons were hurt as organisers battled to control thousands of fans, who wanted to force their way into the Makhulong Stadium in Tembisa, north of Johannesburg.

A security man and, at least, 12 fans were reportedly hurt in the chaos. Reports talk of more than 12 persons hurt in the melee. The match was held up for about five minutes early in the second half because of the unruly fans, who broke one of the railings in the stands at the match venue.

“The crowd control was very poor,” said Lawal Mohammed, a Nigerian resident in South Africa. “I was forced to leave the game before the end because I feared for my life. “At a time, there were more people locked outside the stadium than were inside.” Another fan, Sunday Ephriam, said: “They should have charged even a token for the match, so as to control the crowd.”

After 16 minutes of action, a fine inter-change of passes between Obinna Nsofor and Yakubu on the edge of the box put through the big Everton's striker, who drilled home sweetly past the Korean goalkeeper for the game's opening goal.

It was The Yak's 20th goal in 52 appearances for Nigeria.

Nsofor doubled Nigeria's advantage in the 61st minute when he tucked away a penalty after substitute, Kalu Uche, was fouled inside the box by his Korea marker. Substitute Obafemi Martins made it 3-1 for Nigeria when he nodded home an inch-perfect cross delivered by Uche from inside the box in the dying minutes of the test match.

North Korea pulled a goal back in the 63rd minute when Japan-based Jong Tae-Se latched on to a poor back pass by substitute left back, Elderson Echiejile, broke through the Eagles defence before slotting home past goalkeeper Vincent Enyeama. And in stoppage time, the Asians would have made the scoreline more respectable but an ambitious effort from a distance crashed against the crossbar after beating Enyeama.

Nigerians were left off the hook when Chidi Odiah's tackle against a Korean striker was adjudged to have been committed outside the box and the resulting free kick was blasted wide.

Korea's team was reduced to 10 men after defender, Cha Jong-Hyok, was sent off in the 79th minute for his second booking of the day.

On the back of his equaliser against Colombia the previous weekend, Monaco's youngster, Lukman Haruna, was again impressive as a central midfielder, linking the defence with attack with even more confidence. The Koreans took control of the game early on, getting two shots on target as well as two corners, but Nigeria gradually got into the groove before Yakubu's go-ahead goal appeared to calm their nerves.

Nigeria carved her first opening on 12 minutes, when Sani Kaita delivered a cross from the right, but Eagles' striker, Nsofor, headed wide from inside the six-yard box. On 29th minute, Korea cut open the Eagles defence, but the final effort by the Korean striker from the top of the box missed its mark narrowly. Just before the break, the lively Nsofor forced a save from the goalie when he stylishly dashed inside the box only for the goalkeeper to scramble his shot for a corner.

Four minutes after the interval, Nsofor again tested the Korean goalkeeper, who did well to put a strong hand and keep out the Malaga striker's left footed pile driver. However, as the game wore on the North Koreans grew in confidence and began to push the now tired-looking Nigerians back before the wind was taken off their sail when Jong-Hyok was sent off. Nigeria is drawn in Group B along with Argentina, Greece and South Korea, while North Korea are pitched in Group G with Brazil, Portugal and the Ivory Coast.

Meanwhile, FIFA and the Organising Committee (OC) of the 2010 FIFA World Cup have been informed by the South African Police Services (SAPS) about the incidents which took place on Sunday, during the friendly match between Nigeria and Korea DPR played in Ekurhuleni, Johannesburg.

“FIFA and the OC would like to first wish a prompt recovery to those who have been affected by these incidents. In addition, FIFA and the OC would like to reiterate that this friendly match has no relation whatsoever with the operational organisation of the 2010 FIFA World Cup, for which we remain fully confident. Contrary to some media reports, FIFA had nothing to do with the ticketing of this game,” FIFA said.