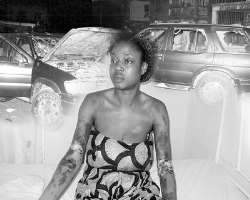 Bolanle, the estranged wife of the Deji of Akure, Oba Oluwadamilare Adeshina, in this interview with SUNDAY ABORISADE on the telephone from her hospital bed, explains why the monarch and his thugs attacked her in public on Sunday.

Why could have made your husband, the Deji of Akure, to come to your father's house to attack you? He told me sometime in October last year that he wanted to take another wife. He said the woman was a former wife of the late Chief MKO Abiola and that she is rich, but I tried to discourage him from doing so. I asked him what else he wanted, because if he wanted money, his position as the Oba was enough to fetch him wealth. You don't need to marry a wife simply because of her money.

That was how it started. He started castigating me that I was too violent. The day he wanted to drive me out of the palace, we had no quarrel. He just sent me on an errand, before I came back, he had changed all the keys to my room. I had to sit outside. Since then, people have been pleading for me but he refused to take me back. That was how I started living in my father's house. His new wife said I am a witch, and that each time she saw me, it would appear as if she saw a lion coming. She said she didn't want to live with me again; that Kabiyesi (Oba Adeshina) should find something to do about it. That was how he sent me out of the palace

So what happened on that Sunday evening?

Kabiyesi came to my parents' residence at 141 Hospital Road, Akure around 5.30 pm. When I saw him and those that came with him, I knew that there was a problem. My daughter rushed to tell me that her father, the king, was coming with some people. I decided to hide in my room. But I had to come out when he was threatening that he would burn down the house if I failed to come out and meet him.

He climbed the stairs to my room with his wife, Remi Abiola, and the four hefty thugs that came along with him. He just ordered that those boys should be beating me, but my friends that were around prevented them. The next thing, I saw was that kabiyesi himself slapped me while his wife wanted to hit me with a big stick but my friends collected the stick from her. That was how they all started beating me. He also brought out that powder and wanted to pour it on my face but I blocked him with my hands, so it poured on my hands. Since then, my hands have been peeling.

But the Oba has said he did not come to your house on that day...

That is a blatant lie. Even you also know. Everybody, including journalists, saw him because my brother called some press men to draw their attention to the situation. The incident led to a serious traffic congestion, being a major road and people packed their cars to catch a glimpse of a first class traditional ruler in Yorubaland fighting with his wife on the street. It was even at that stage that some sympathisers pleaded with him to stop, When he continued to display his arrogance, the people chased him away. I had to use my own vehicle to block his vehicles so that he would not be able to run away. The police came moments after and restored normalcy.

They also took the king and his new wife away in one of their jeeps.

Have the doctors been able to identify the composition of the powdery substance poured on you by the king?

The doctors have not told me the substance, but I believe that the so called ash was mixed with some traditional medicine, because it is peeling off my skin already. One of the men he brought to my house that day took a local cock from his car, pulled out its head and sprinkled the blood all over the place chanting some incantation. I don't know the implication. The whole world should please save me for the sake of my children.

Is it true that the king was angry with you

because you were dating a governor?

It is a lie. Just take it as the cry of a drowning man. He knows that he has disgraced himself with his action, so he is looking for public sympathy. He wanted to paint me black before everybody, but he won't achieve that. I was made to pass through every necessary traditional rites required of a queen before I got married to him. No man in his right senses would want to have an affair with the wife of a king because they know the repercussion. It is like dating an Orisa deity.

I only went to the wedding ceremony organised by the governor for one of his daughters and I was there to represent the king and I greeted him openly before everybody. I did not visit him again after that.

This is the eighth month after he drove me away from the palace. Why is it now that he is accusing me of infidelity? God will surely judge him.

How did you meet the King before you got married?

He met me in Akure during one of his visits to Nigeria from overseas where he was based long before he became the king. The affair continued until he became the Oba and we got married.