The Good and Bad At The 2010 HHWAwards. (PICTURES) 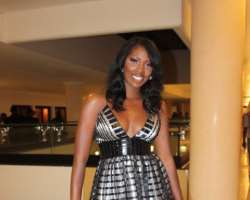 After a series of performances by upcoming artistes. The host who the audience never got to see announced Goldie as the opening act 4 hours after the event was meant to kick off. Goldie performed songs like 'nothing has changed', recently released 'You know it'. Comedian Jedi came next to announce Terry Tha Rapman as the winner of the Best Rap single. Before Bantu, who presented the plaque for the best RnB to Banky W, Big Lo and 2Shot came on stage. “I think we have a mix up here maybe we just clap and do the whole thing again” Bantu suggested when the nominees for rap single were announced instead of RnB. Banky W arrived the stage with Wizkid and Skales to receive his plaque. “I dedicate this to the best record label in the world, EME. no disrespect to Mo hits and the rest”, Banky said just before he 'introduced' his entourage.

Jesse Jagz who couldn't memorize his speech came on stage with a sheet where it was written, he has a great sense of honour and the audience thought likewise. He then announced Sound Sultan and Omawunmi, whose sense of humour cannot be said to be same as her jokes didn't work with the crowd. Sound Sultan and Omawunmi anounced Timi Dakolo as winner for the Best Recording Of The Year for 'Heaven Please'. Rooftop MCs announced Ifeoma Williams who presented Kefee her plaque for Best Collaboration for her song 'kokoroko' with Timaya. Kefee didn't appear several minutes after she was announced winner, she later did only to be seen fitting her hand glove.

The official sponsor's ambassador, Dizzy gave a prep talk before a video from the sponsor was played to the audience. It was then D'Prince's time to perform. Dayo Adeneye and Azuka Agujiuba came on to present the Best Rap album category. Da Grin's parent came on to receive the plaque for Best Rap album with the late rapper's dad reciting lyrics for 'pon pon pon' just before he said 'Thank you, Nigeria'.

Kel performed 'pon pon pon' with Slim T. Skales and Omawunmi performed 'thank you' which was originally done by Da Grin, next was YQ and Dark Poet before Mai Atafo presented Wande Coal with the plaque for Revolution Of The Year. Terry Tha Rapman was called to announce Modenine as the Lyricist on the roll for the fifth time. “Thank you very much, peace” was all Mode9 said

Lara George won the plaque for female lead vocal performance just after Darey was presented with his plaque for male lead vocal performance by Dane and Dorisha George. Dane sang Dorisha a song, looked like it was rehearsed still the crowd loved it. Mo Abudu arrived the stage with her partner to announce Clarence Peters as Best Music Video director which was received by Illbliss.

YQ came on stage with three dancers to perform 'I like girls'. GT the guitarman was announced but Dayo Adeneye and Alex Obosi came on stage instead to present Don Jazzy with the award for Producer Of The Year. Since D'banj was absent, Dr. Sid spoke on his behalf.

Steve Ayorinde announced the induction of Femi Lasode into the hall of fame. A rep for KIA and MTN announced and present Skuki with the plaque, blackberry [which every winner on that night received] and KIA rio car key. Another tribute to the Late rap artiste Da Grin was televised.

General Pype drove into the venue in a tricycle for his performance. TY Bello announced Bracket as winners of the Song Of The Year just before Wande coal was presented with the plaque for RnB/Pop album of the year by Djinee and Remi. Artquake came next with an earth-chattering performance and energetic kid dancer.

D'banj was absent, while Audu Maikori and Jesse Jagz were seen – M.I. was absent and so was Bracket as previous reported. Steel [of taka sufe, omoge and south african girl fame] was seen dragging Funke Akindele into the award arena from the yellow carpet actress. She couldn't stay till the end of the event as she was coming from the set of a movie. “Never believed we would win” brothers Skuki said when asked if they saw a win coming against acts like Jesse Jagz and Mo'Cheeda for the next rated category. A few celebs were spotted at the regular section of the audience and VVIP guest were delivered to the venue in a white limousine.