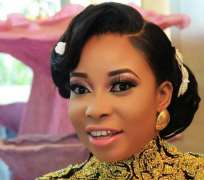 Actress, Lizzy Anjorin, is already counting down to the opening of her clothing line which will be on the Island.

The actress has proven to many that she is not only good at acting but in music, fashion and business generally as she is not slowing down at ensuring that she builds a strong empire for herself and daughter.

Lizzy in her usual way did not fail to address single ladies and even the married one stating that living a single life can be very terrible if care is not taken as such life is meant for ladies with iron heart.

20days to the Opening of my Island fashion show room!!!!‎ Choose wisely, Career or Family woman? SiIn her words, “ngle women sleeps alone, pay bills alone, they most times turn to enemies like friend to share their secrets, their pillow is their soul mate, some of these single ladies have kids and some don't have, some got duped by the so called married men to put food on the table for his family... don’t envy your single friend because she's more successful than you, don’t fight with your hubby because you want to be single like your friend; u assumed she doing better than u.. walahi I pity u, bcos the bills she shoulders alone as a single lady is heavier than container, you are being misled bcos of her flamboyant life style. Behold, single life is terrible! It’s only meant for ladies with iron heart, believe me it's worse than hell. ‎

“Back to single ladies; bcos your friend's husband bought her a new car, house, or he's very rich: you also want to get married by all means. Omo! I laugh in Spanish because some of those married women u are seeing are going through hell, some of their hubby are so terrible that when devil see them, ESU himself will take a bow, some hubby has slept with their maid, some talk evil against their wife bcos they want to sleep with their wife's friends or relatives, some are so fetish that they have turn the house to shrine, some will bring another woman to their matrimonial bed, some even spend quality time in club, some can't even deal with his wife sleeping in his room for overnight, some would beat his wife like kampala, but because of her endurance .. Mr man will want to shower her with some ojuaye gifts trust my ladies they won't tell u those horrible things their hubby does they will only give u the good news; OMG!! Baba yi just got me 2018 range, we are moving to ogede Island next week. If only u know what the alakori is going through. Anyways, we should all prepare for what we want, close your eyes and do it; single Ladies should not envy married women and married ones should not see single Ladies as their role model.. Let's be contented with what we have and be thankful for everything -tag a frend dat need dis”